Take a seat in Exanimis’ theater.

Their new show, entitled Marionnettiste, is about to begin. With this first album, the french band composed of Julien Marzano (guitar), Alexandre Dervieux (vocals/guitar) and Julien Prost (bass) is ready to expose us their universe. 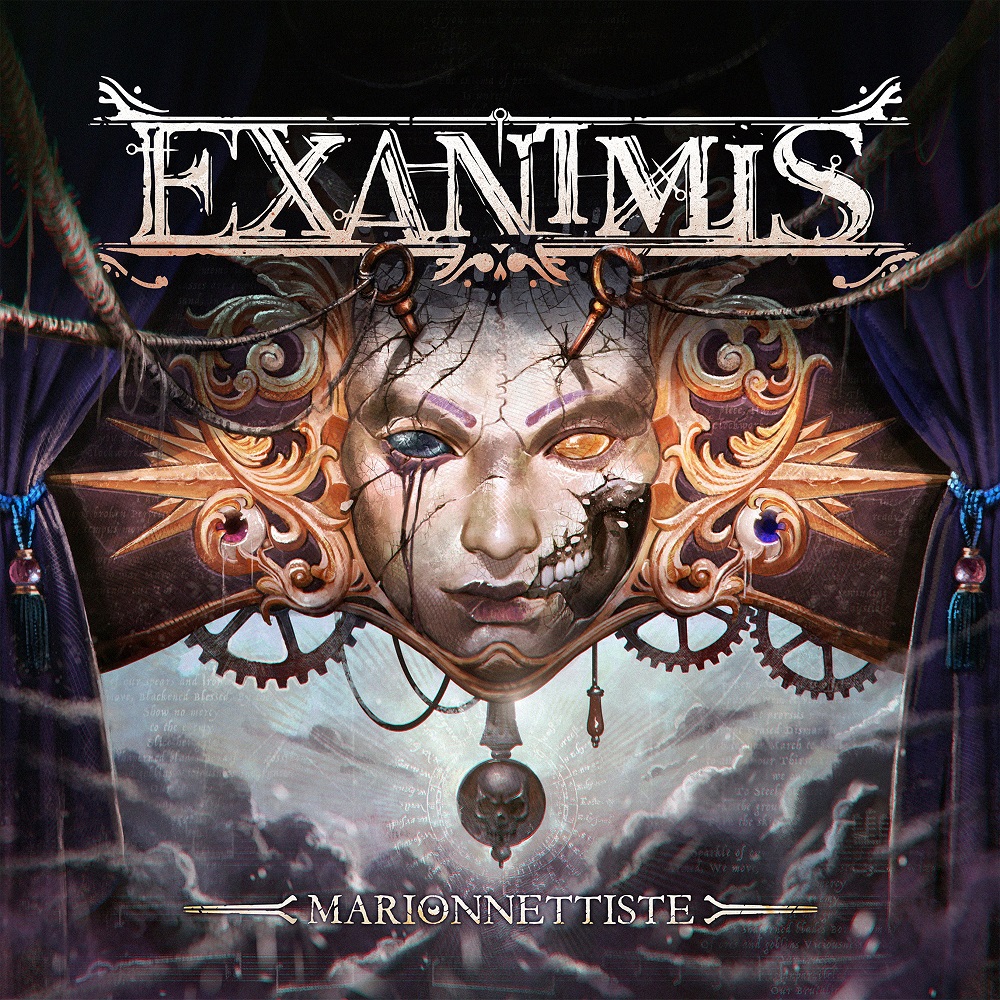 Accompanied by Clément Denys (drums, Fractal Universe, ex-Benighted Soul, ex-The Scalar Process), Morgan Koch (lead guitar, Swarmageddon), Nathalie Theveny (piano), Flavien Morel (vocals, Logruss, ex-Benighted Soul, ex-Akroma), Raphaël Jeandenand (Hammond organ), Lorine Pauget (backing vocals) and Maxime Poirot (orchestrations), this first album is an important project!
Because the band doesn’t settle for heavy Death Metal on some epic samples, it’s quite the contrary. The musicians seem to be skilled, and the terrific visual art offers an immediate immersion in a both gloomy and macabre universe, which is confirmed by Prélude du songe avant le cauchemar, a first song driven by a very melodic keyboard. Impressive ambiences join the sound, then the heavy The Wrathful Beast is next. Riffs are massive and ornated by all those Symphonic elements, then the characters join the scene. Vocals first, then sharp harmonics, as well as complex orchestrations that create a contrast with this violence, and which throw us on the dark Throne of Thorns. The song is oppressive, but also captivating and jerky, but the accompaniment by mystical backing vocals gives it an impressive personality, then some voices are next before letting us headbang on the rhythmic again.
Stampede Of The 10-000 is next, and once again the song is crushing, revealing some warlike greek influences. The song is dark, piercing and impressive at the same time, transforming the singer into a conductor before Entracte Du Sommeil Pendant Le Cauchemar, which offers a mesmerizing interlude made by keyboards and violin. Dark and worrying sounds are back on Cogs, Gears & Clockworks, whether it is through this introductive sample or those heavily influenced by classical music riffs. The sound is majestic, seizing and cleverly placed, just like on The Slow Flow Of The Spume On The Shore, a very groovy song despite its smashing blackness and its instrumental complexity. We find all the previous elements on Cathedral, an incredibly long track, but that allows the band to unveil us all their musical personality’s shades. Between mystical accents, heavy riffs, epic and complex parts on which vocals never decrease, this composition is clearly their masterpiece. It’s with Epilogue De L’eveil Après Le Cauchemar that the oniric saga ends, making us enjoying one last time the piano before fading in the void.

Exanimis is a supernatural project that came to life with the musicians’ commitment and craftsmanship. Sometimes complex, sometimes heavy but always epic, Marionnettiste is an intense and powerful album, that needs several listening sessions before catching all its flavour, which sometimes seems familiar to us.