Eremit is back to conquer heaviness.

Created in 2015 in Germany, the band composed of Moritz Fabian (guitar/vocals, Dragged), Pascal Sommer (guitar) and Marco Baecker (drums) offers us today Bearer of Many Names, its second album. 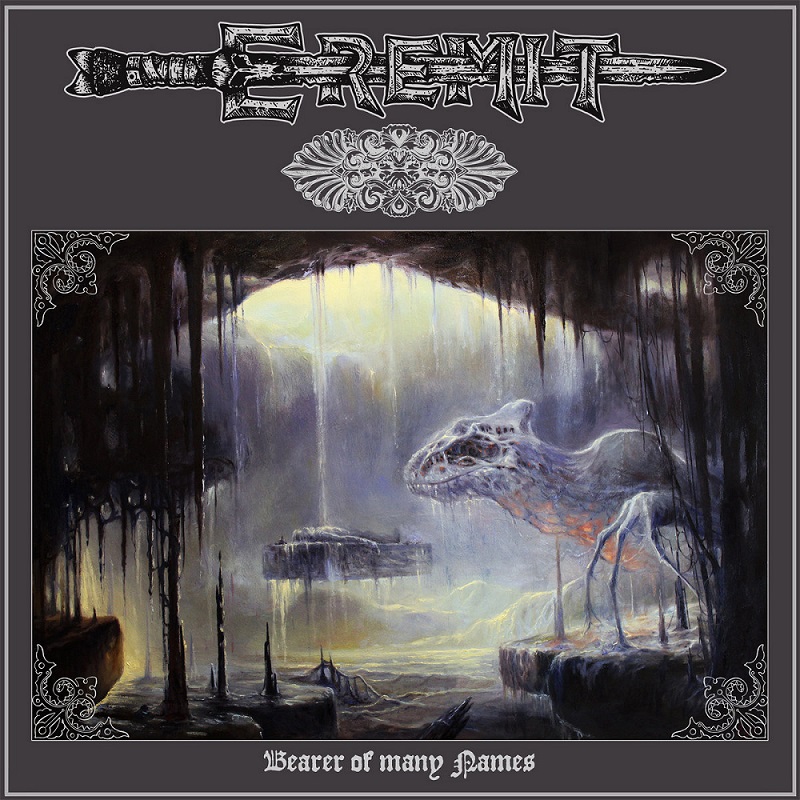 Three songs. More than an hour of a dark and oppressive Doom/Sludge that the band had illustrated again by the magnificence of the polish artist Mariusz Lewandowski (Bell Witch, Abigail Williams, Psycroptic).
Enshrined in Indissoluble Chains and Enlightened Darkness, the first song, begins with airy and quiet sonorities that will be crushed by a pachydermic heaviness, borrowing to Funeral Doom before being conquered by rage. Melancholy quickly comes back with DSBM influences, especially into those dismal howlings and a guest spot from Daniel Droste (Ahab), then once again rhythmic will be strengthened by a stabbing and powerful sound, then a break allows us to breathe before riffs come to crush us again. Secret Powers Entrenched in an Ancient Artefact comes next, and the band keeps us in its universe with heady riffs before bringing in vocals and airy parts. A break adds overwhelming heaviness and sound oppression before everything progressively fades away. Unmapped Territories of Clans without Names comes to close this album with nearly tribal percussions that slowly accelerate under an hypnotic guitar, then the explosion suddenly catches us before mashing us. Howlings go straight to the throat, making the rhythmic slow down, then ghostly leads accompany us until the song’s last moments, along with piercing screams.

Eremit’s style is incredibly intense. Each riff of Bearer of Many Names talks to our mind while making it fly, then while crushing it with visceral howlings and as dark and seizing influences as possible.