We have waited, and here it is. Helloween’s new album.

Driven by Michael Weikath (guitar) and Markus Grosskopf (bass), the legendary german Power Metal band offers us its eighteenth album, soberly entitled Helloween. This new album is far from being similar to the previous ones, because whether Andi Deris (vocals), Sascha Gerstner (guitar) and Dani Löble (drums) are still on board, the album marks the comeback of Kai Hansen (guitar/vocals, Gamma Ray, Unisonic) and Michael Kiske (vocals, Kiske / Somerville, Place Vendome, Unisonic), who joined the band again in 2017, for an impressive tour at first.
The band is helped by Jens Johansson (Rainbow, Stratovarius) and Matthias Ulmer for keyboards. 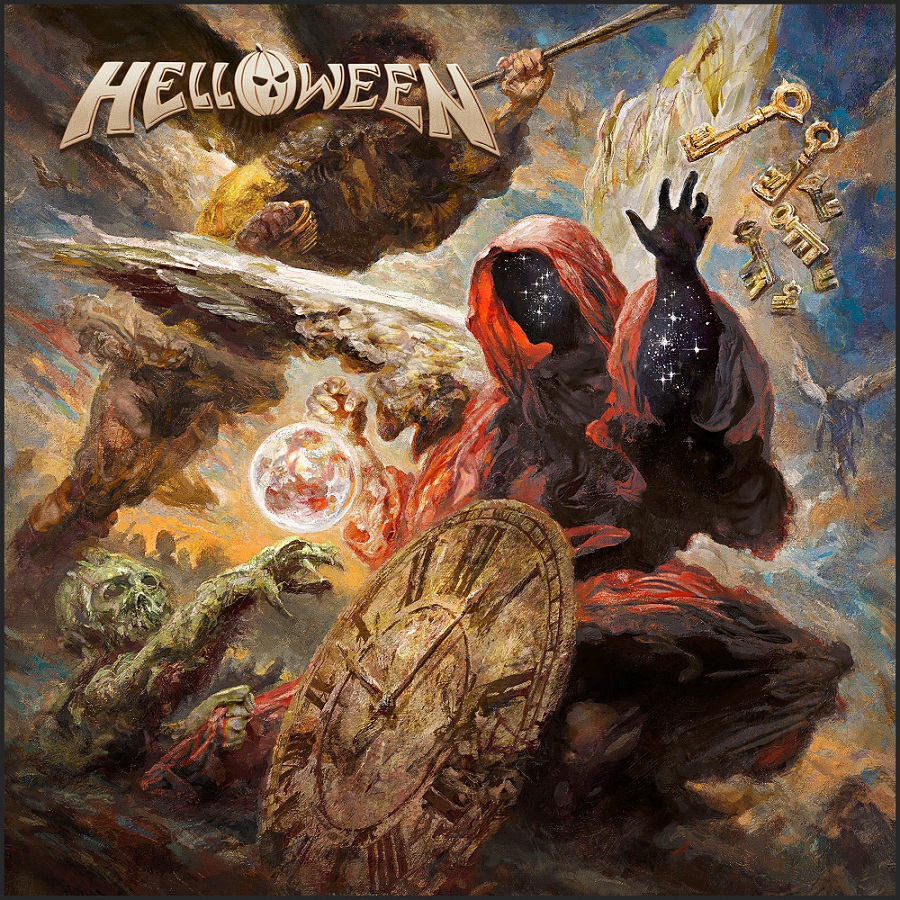 If you wonder who Helloween are, well I won’t answer now, because the band begins this album with Out For The Glory, a song with dark introduction that quickly goes back to an energetic Power Metal. Whether Andi Derris handles the most of vocal duties, we backing vocals from the two other singers, while melancholic melodies from Fear Of The Fallen offer a real complementary and coherent choir. The rhythmic’s Old School energy offers a perfect basis for leads and some softness before Best Time, a shorter but very catchy song. Vocalists answer to each other, then Mass Pollution comes back to some Heavy accents that are also part of the band’s epic and solid sonorities. Angels picks into some darker, but also more piercing tones while keeping some vocal diversity, then Rise Without Chains and its backing vocals offer us a federative composition the band will perfectly place into its future setlists.
The band continues with Indestructible, a groovy and catchy composition that reminds the nineties’ Power Metal, then comes Robot King, a song on which we discover modern vocal effects, but also a very motivating rhythmic and epic harmonics. The short Cyanide let the group strike with a fix of epic melodies surmounted by powerful vocals, then Down In The Dumps offers some unexpected but interesting tones. The song is very catchy, and melts piercing sonorities with a motivating rhythmic, full of rich leads, but we feel blackness is still part of the composition. Orbit offers a short break with frightening tones, then Skyfall, the longest song of the album, begins. The composition is known, but let me tell you that you cannot hear a more epic and diversified song in 2021. Energy, melancholy, intensity, quietness, fastness… all that the band knows to do can be found in this song, but multiplied by a thousand, and adding epic leads and three voices at the maximum of their potential.

You know Helloween, and you know it’s hard to be disappointed by the band. And you’re right. Helloween is undoubtedly the Power Metal album of the year, imagined and built by one of Power Metal’s legends, which is at the climax of its strength.