The legendary At The Gates are back with a seventh album.

The band is part of Melodic Death Metal pioneers since its foundation in 1990. Despite a break in 1996, a shy appearance between 2007 and 2008, then a real comeback in 2010, Tomas Lindberg (vocals, Lock Up, The Lurking Fear), Adrian Erlandsson (drums, The Haunted, The Lurking Fear, ex-Brujeria, ex-Cradle of Filth, ex-Paradise Lost…) and Jonas Björler (bass, The Haunted), accompanied by Martin Larsson (guitar, Agrimonia, ex-Bombs of Hades) and Jonas Stålhammar (guitar, Bombs of Hades, God Macabre, The Lurking Fear) are ready for The Nightmare of Being. 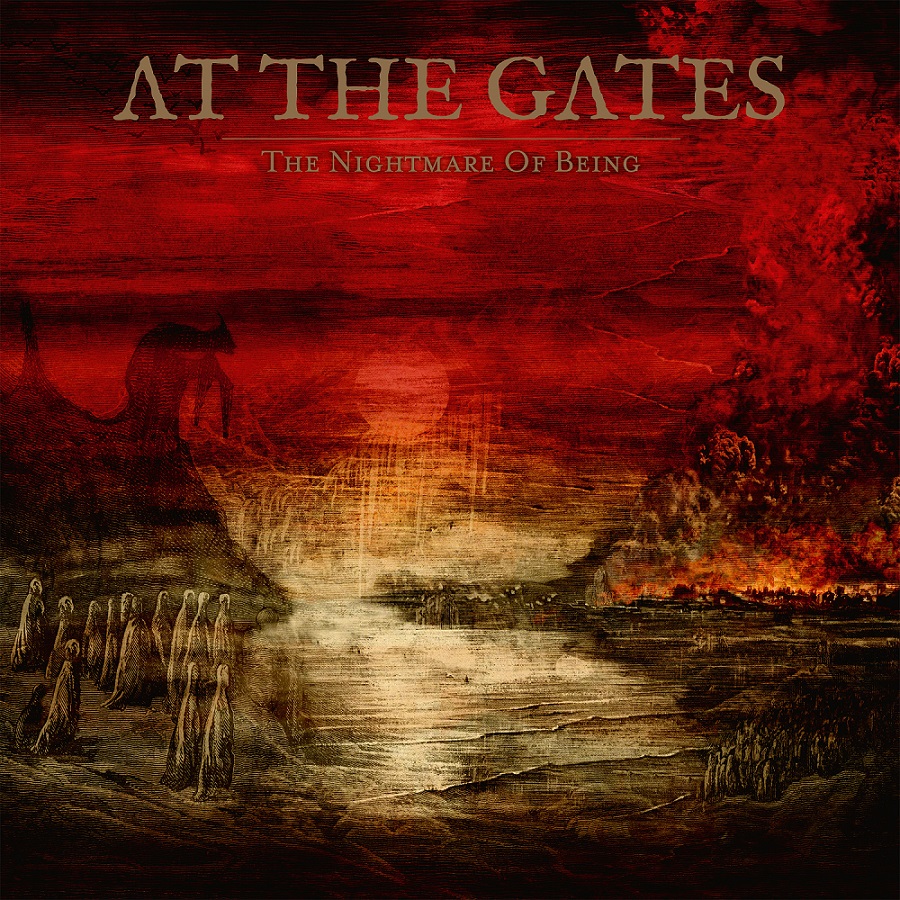 Despite breaks and time passing, the band’s sounds was always incredibly modern, while building the basis of Swedish made Melodic Death Metal’s basis, affectionately named Gothenburg Death Metal. According to Tomas, the album is born from his readings of Thomas Ligotti, and the singer describes it as a dark album.
We begin with Spectre of Extinction, and his worrying introduction throws us into a very attractive spiral of blackness with heady melodies. The frontman’s voice doesn’t move at all, and it offers motivating influences that perfectly fit to this energetic rhythmic, then The Paradox comes to shroud us into this veil of oppression. The song is more raw, more black but it instantly mesmerizes us. Melodies naturally melt themselves to the rhythmic, then The Nightmare of Being offers Progressive Rock accents before unleashing waves of oppressive melodies. Some heavy groove sometimes comes, then Garden of Cyrus continues to play with Progressive influences to create a perfect basis before some gloomy saxophone appears. The song reconnects with a more “classical” sound before letting its place to Touched By The White Hands Of Death, a complaint with melancholic introduction that quickly strikes with the rage of an Old School visceral sound that will speak to early fans.
The Fall Into Time comes next and offers again this worrying, interesting and melancholic melting between the band’s old and new influences, accompanied by some percussions to slowly open the gates of majestic and haunting parts, then more technical elements come to the melting before Cult of Salvation, a heavier but also darker song. It offers some melodic surges, an intense deepness, supported by some words before howlings are back. The Abstract Enthroned reconnects with pure violence for massive and catchy riffs that already register into the legend, while offering more airy, dissonant and oppressive influences, then Cosmic Pessimism will surprise more than one with this joyful introduction. The song also picks into Prog to create a heady and addictive sound, but also very frustrating, because we always expect an ambient and liberating explosion. Eternal Winter Of Reason offers a heady and very raw final, with a sound anchored into this Old School basis with soaring and mesmerizing influences, that allow to close this chapter with an interesting message.

At The Gates has nothing to prove anymore. The band reigns over Melodic Death Metal since its creation, but The Nightmare of Being allows them to explore close and different universes. Blackness, anguish, Prog influences… everything that Lovecraft lovers can enjoy.