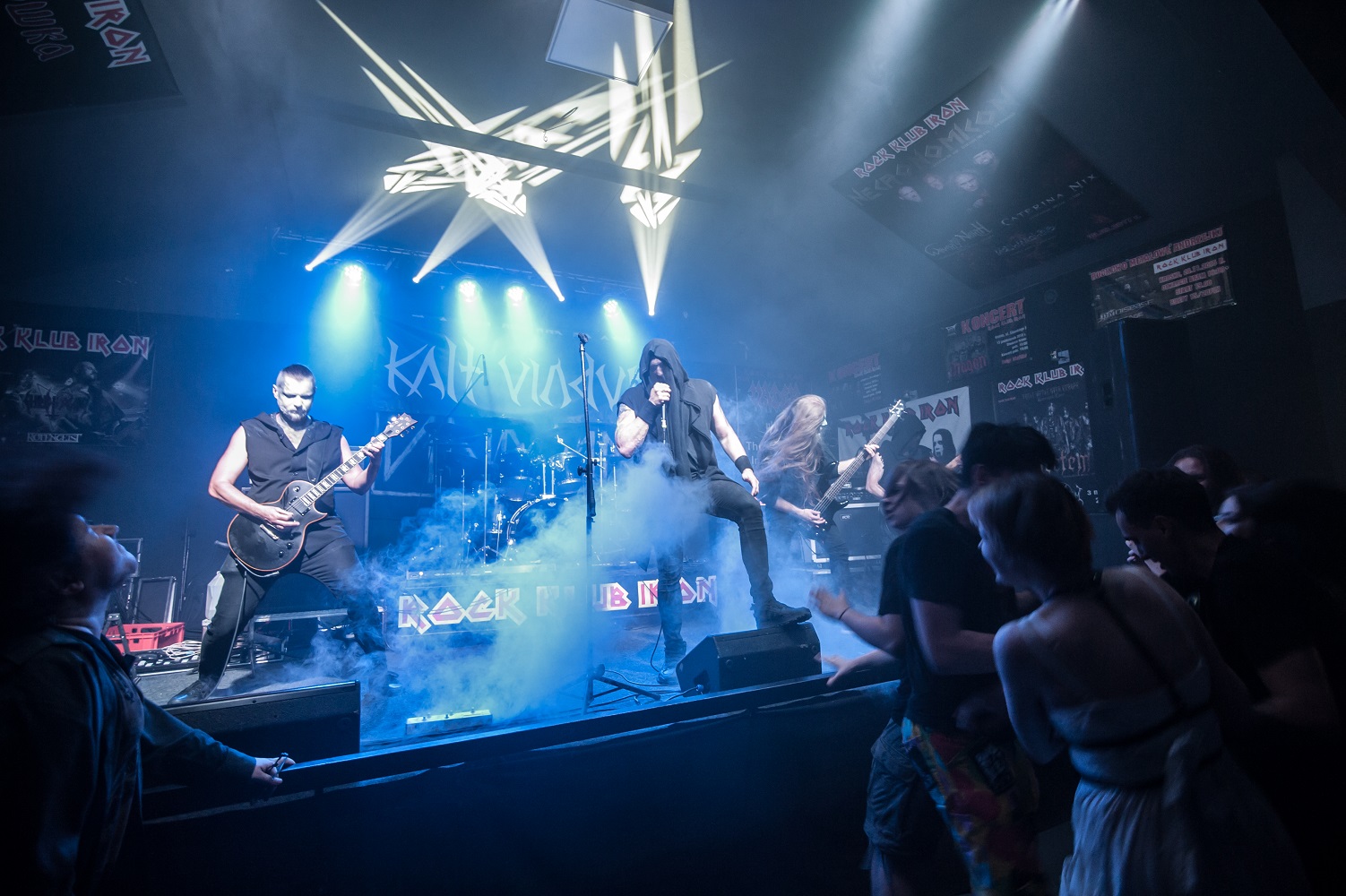 Hello and first of all, thank you for your time! Would you please introduce yourself and the band Kalt Vindur with your own words please?
Artur Szydlo (guitar): Hello, I’m Artur and I play the guitar. Kalt Vindur is a group from south-eastern Poland, a region called Podkarpacie, we label our music as “Podkarpacki Black Metal” (“Subcarpathian Black Metal”) because it is inspired by the spirit of the region we come from. We believe that every fan of dark music can find something for themselves in our melodies.

Where does the name Kalt Vindur come from?
Svart: The name “Kalt Vindur” means “cold wind” in Icelandic language, the originator of the name is U.Reck, keyboard player of the band Lux Occulta. On our first album, U.Reck recorded keyboards which enriched and deepened the atmosphere of this album.

When I listen to your music, I of course hear Black Metal’s violence, but also Doom Metal’s melancholy and haunting tones. How can you create a balance between those two universes?
Svart: It comes naturally to us, it’s just how we feel about music. Balance in sounds is something we strive for, like yin and yang – it is impossible to be complete without the other part, there is always light and darkness in each one, two contraries. One cannot exist without the other, and denying this truth is self-deception.

Which bands could you quote as your musical influences?
Svart: The names that I will mention are not inspirations per se, they are bands that I respect and like their music, but they are a drop in the ocean of inspirations. They are, among others, Pan.Thy.Monium, Emperor, Satyricon, Morbid Angel, Deicide, Gehenna, Azarath, Portishead, Massive Attack, and many more through Electronic, Classical, relaxing and Ambient music. 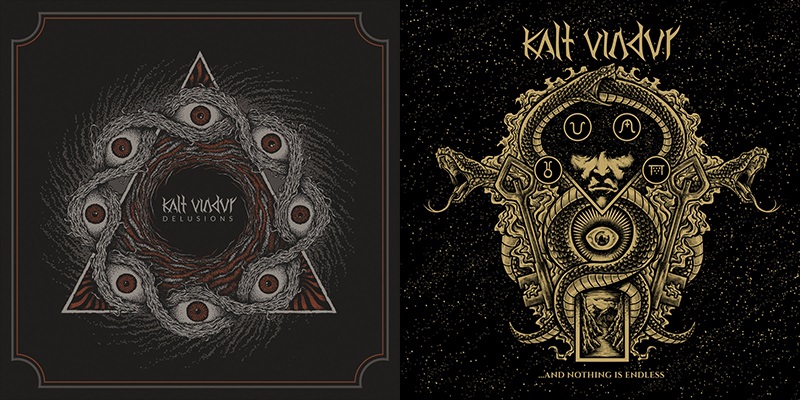 You already have two full-lengths out so far, Delusions released in 2017 and …And Nothing Is Endless released in 2020. How does the creation process happen for those ones? Do you feel an evolution between those records?
Svart: The first album Delusions was the fruit of a successive gathering of ideas, without any pressure, because there has not been a fully formed band formed yet. …And Nothing Is Endless brought some expectations to reinvent ourselves to some extent. We don’t feel like repeating ourselves so we always try to create original and unique music. As it comes to evolution between albums, I can definitely perceive it, the new album is different in comparison to the first one for me, more mature for sure.

Where do you find inspiration to create your songs? Does it only come from music you listen to, or from anywhere else?
Svart: It usually happens naturally, I pick up the instrument and search for the sounds that “speak to me” the most. Although it did happen that we started to do a cover with the intention of rearranging it into our own song, it was indeed a direct inspiration, but I will not reveal which song was created in this way, let’s keep it as a secret.

Covid-19 stopped the world just before the release of …And Nothing Is Endless, your second album, did you have time to play some songs from this album on stage?
Svart: Unfortunately, it was not possible for us to play any live shows after the release of …And Nothing Is Endless. Governments introduced restrictions on the freedom of citizens, which unabled the bands from playing shows and fans from participating in concerts. In the upcoming days we will be playing two concerts in Warsaw and in Krosno. In August, we will also perform at Siekiera Fest festival in Wroclaw.

How did you deal with the worldwide crisis as a band?
Svart: Everyone of us works daily jobs, music is not a source of our income. It is more an expensive hobby, therefore it did not affect us as a band. The lack of concerts was upsetting but the “spare” time was used by us to create new music.

It’s nearly a year since this album was released, what can tell you about this time of promoting the album?
Svart: We received a lot of very good reviews which stated that the musical content of this album is at a high level. It is very important for us as a band, this kind of feedback, which confirms that what you do is valuable not only for you, is highly motivating.

Maybe you already have plans for the future? Have you already begun to compose new material for a next release? If yes, what can you tell us about this new stuff?
Svart: As I mentioned earlier, there are 3 summer concerts ahead of us, but as we expect more restrictions on freedom, the so-called Lockdowns, we are not planning anything show-related after the summertime shows. But we’ll see what the lockdown-situation will be. In August we will be heading to the studio to record some new songs. So, indeed, new material is emerging from our rehearsals. The new songs will be raw but with a lot of melody. There will probably be more blast beats in comparison to previous records. After recording the drums, these tracks will be developed musically, so far base of lead guitars is established.

You come from Poland, a country known for being very strict about religion, but also for very qualitative Metal bands. How is the underground scene in your country?
Svart: I believe that the scene in Poland is full of great bands that continue to develop their art despite adversities of fate and maintain a high musical level. I encourage you to get to know the Polish underground 🙂 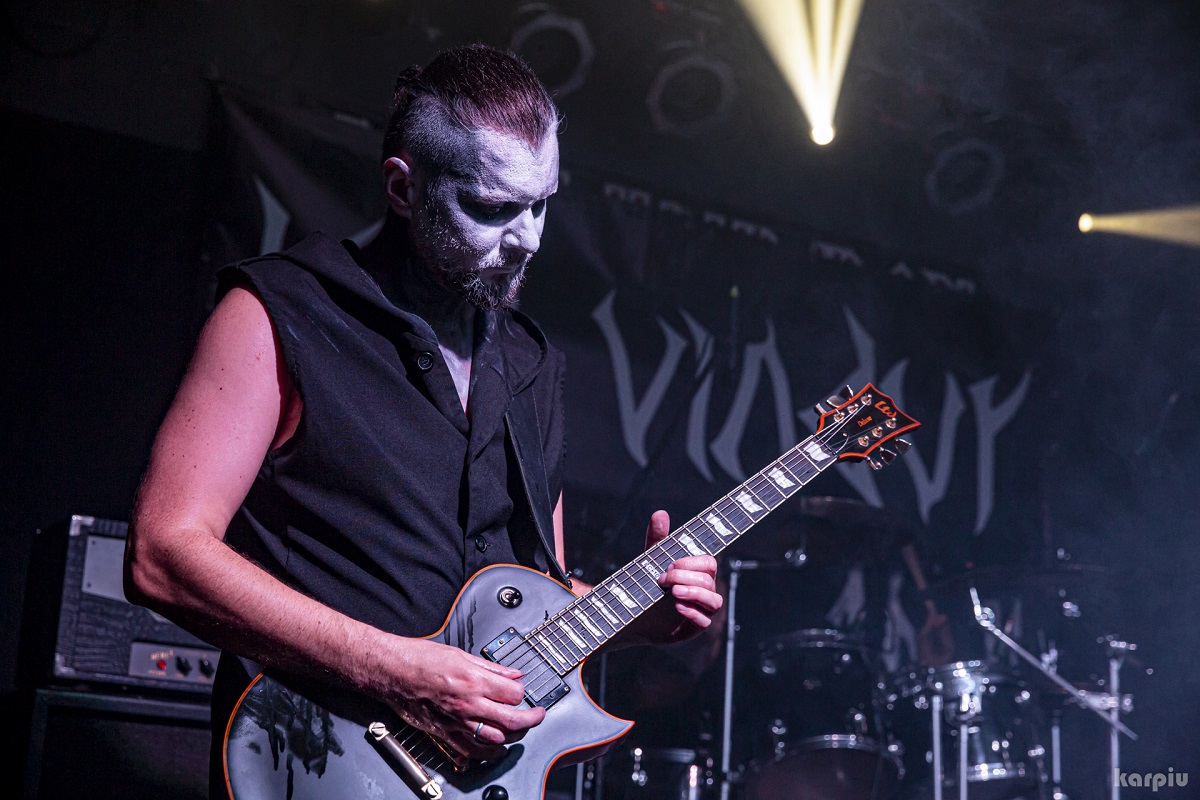 I saw some videos of your live shows, and it seems to be very energetic. What do you feel when you are on stage? In some recent pictures, the band wears makeup, do you feel it helps to improve the ambience?
Svart: Yes, our concerts are full of energy, our music works very well in the live version, and playing live causes a lot of adrenaline. Corpse paints, although they are nothing original, add a certain theatricality, something odd, it is not the same image of us as everyday look. In addition, we are still introducing new image elements …

What do you love about your music that you cannot find in other band’s music?
Svart: I believe that our sounds are full of catchy motifs and at the same time thoughtful solutions, these are not random things, but, let’s be honest, we won’t reinvent the wheel. We create music that we like and if someone else likes it, it’s great!

What is your best and your worst experience as a musician ever?
Svart: Playing and creating music is a challenging task, but we try to treat it with passion. When it comes to new music, a new song, when you rehearse guitar with drums and bond it into one, it’s a really great feeling when it starts to work well together. The album’s mixes are a bit tiresome, listening to the music hundreds of times can get tiring, but when you rest and listen to it, the final effect is a reward.

Maybe you already heard about the french Metal scene? Which french bands do you know?
Svart: A band from France that I’m familiar with very well is Misanthrope. Another one is Anorexia Nervosa, I saw them a few years ago at a concert in Poland. Maybe you can recommend me bands that are worth checking out?

Last question: which bands would you love to tour with? I let you create a tour with Kalt Vindur and three other bands!
Svart: Haha, thanks for this opportunity – let my imagination run wild now… I would like to go on tour with e.g. Emperor, Satyricon and e.g. german Morgoth.

That was the last question for me, thanks a lot for your time! Last words are yours!
Svart: Thank you Matthieu for your time and the opportunity to promote Kalt Vindur on Acta Infernalis, it’s very kind of you. I wish you all the best and I greet everyone reading this interview.