Internal Bleeding, Slam Death pioneers are back with Heritage of Sickness II, a new compilation.

The band created in 1991 by Chris Pervelis (guitar) began its career with demos, so Comatose Music decided to reissue Invocation of Evil (1992) and Perpetual Degradation (1994) today. 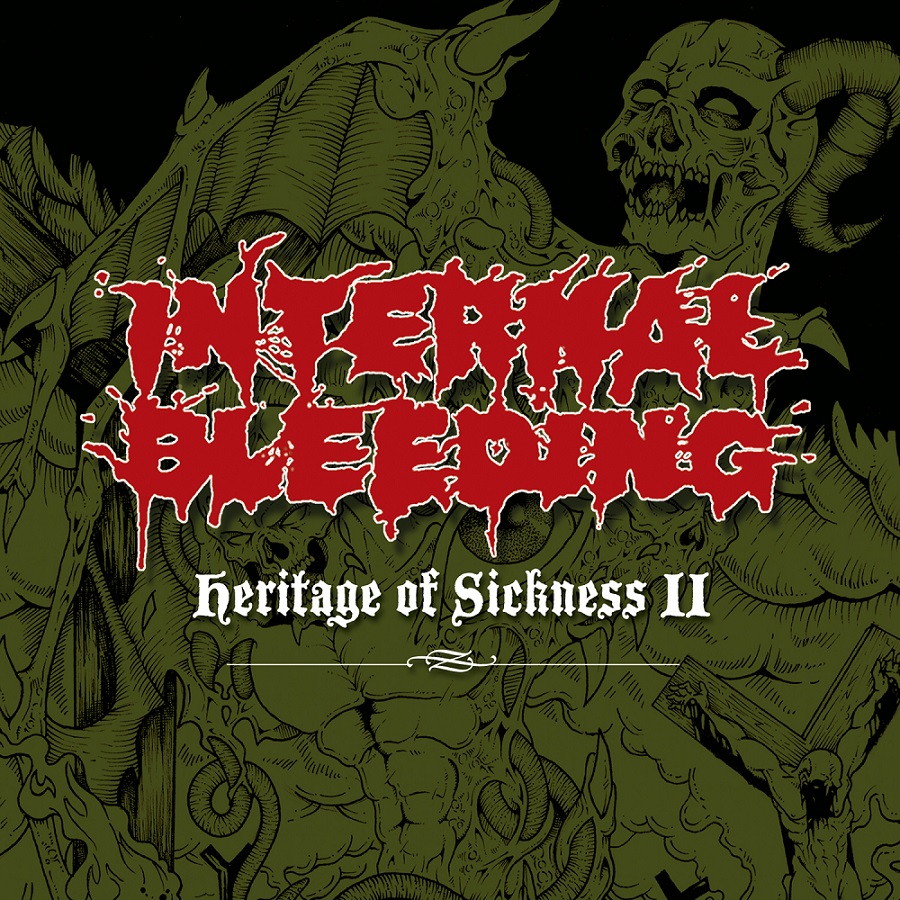 We begin with the five songs of Invocation of Evil. At the time, the band was accompanied by Bill Tolley (drums/choirs, RIP 2017), Brian Hobbie (bass, Mortiferoth, ex-Broken Hope), Anthony Miola (guitar) and Wallace Milton (vocals), but we also have Darryl Wagner (ex-Pyrexia) on backing vocals. After some worrying and dark introduction called Beyond the Gates of Tartarus, the band strikes with the thick and Old School rhythmic of Despoilment of Rotting Flesh. We feel that under those waves of violence surmounted by cavernous howlings an aggressive and hooking groove is hidden, just like Ruthless Humanity (written byGuy Marchais, former Suffocation, Pyrexia and Internal Bleeding guitarist) and its quite technical rhythmic that still keeps fastness and greasy patterns. Gutted Human Sacrifice stays on those Old School sonorities and those killer accelerations between two insane moshparts that will ensure some sizable crowd movements. Same observation for Epoch of Barbarity, a composition that places explosive breaks and a crushing violence to close the demo.

Two years later, Perpetual Degradation is released, with two changes: Bill Tolley handles lead vocals, replacing Wallace Milton, and the sound evolved. We can notice it since Anointed in Servitude, an as greasy as effective composition that gives the bass a more round sound, and snare drum a Brutal/Slam Death this characteristic sound. Same feeling for the crushing Conformed to Obscurity and its unstoppable rhythmic, the sound evolution really serves this brutal aggressivity but also instruments accuracy. Prophet of the Blasphemies offers a very catchy and accessible pattern, then the break comes to annihilate every resistance. The rhythmic will strike again, then Inhuman Suffering melts technicality to the song’s raw strength, on which Matt Duncan (ex-Afterbirth, RIP 2016) participates to backing vocals.

Let’s come back in 2019, when the band played in Japan, for a live recording of Focus, a song from their last album released in 2018. Accompanied by Chris McCarthy (guitar), Kyle Eddy (drums), Ryan Giordano (bass) and Steve Worley (vocals), Chris Pervelis doesn’t change its recipe, cleverly accommodating raw strength, heavy breaks and some more technical parts, like this unexpected solo.

Internal Bleeding’s lifespawn is not a coincidence. Despite two breaks, the band celebrated its thirty years of career with Heritage of Sickness II, a compilation that proves the band kept the same rage and the same strength over the years.