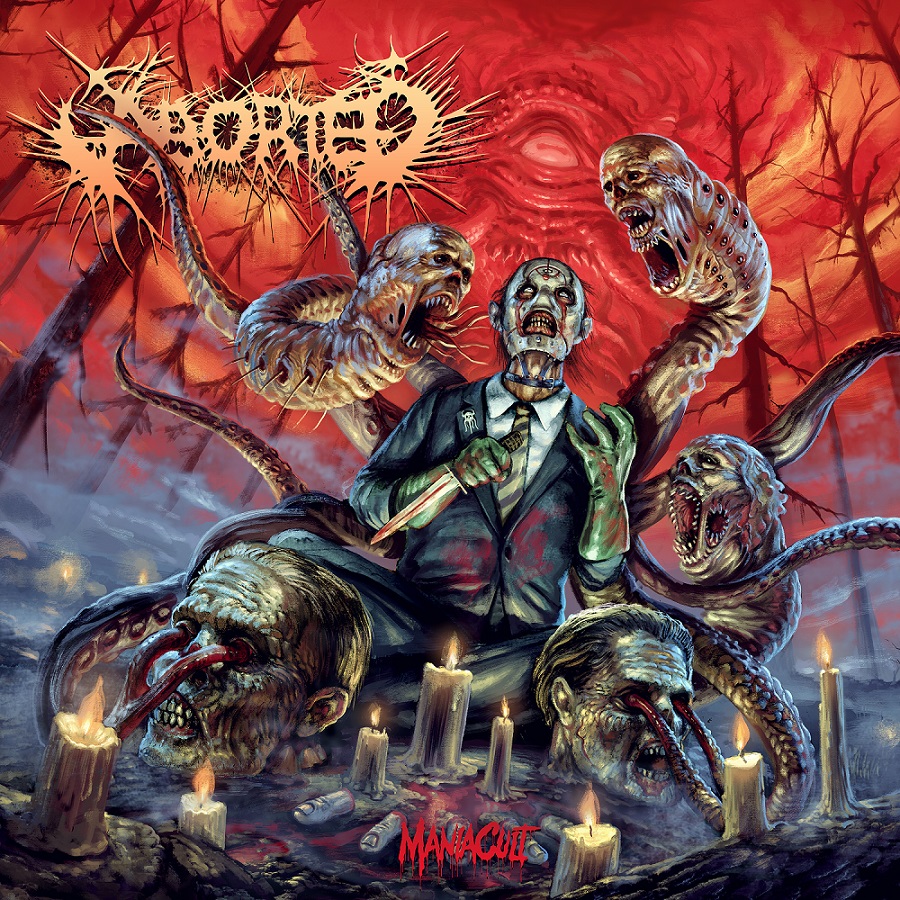 Once again recorded/mixed/mastered by Kristian « Kohle » Kohlmannslehner (Agathodaimon, Benighted, Crematory, Cytotoxin, Lacrimas Profundere, Powerwolf, Sinister…) and illustrated by Pär Olofsson (Abominable Putridity, Arkaik, Aversions Crown, Devourment, Cognitive, Pathology, Exodus, Immolation…), the album sounds like the worth successor of their killer Death/Grind.
We can easily feel it since Verdef, the first song, that crushes us with all its heaviness after a dark and worrying intro. Some heady leads drive us to ManiaCult, a monstrously brutal song, accompanied by Joe Bad (Fit for an Autopsy). Some technical parts are melted to the catchy groove, but blackness is never this far from violence, just like the intense Impetus Odi. The song is as weighing as aggressive, and even the bloody solo confirms us that everything is made to make us nod while we wait to find explosive crowd’s way. About vocals, Sven surpasses himself between the different growls and screams as we can hear on Portal to Vacuity and its Black Metal influences, that offer a quite different but still hooking ambience. Old School violence is back on Dementophobia and its leads that nearly sounds too joyful, then A Vulgar Quagmire makes this oppressive ambience reborn before crushing us once again under riffs’ strength. The song makes us clearly feel this Grindcore basis, then Verbolgen allows us to breathe with some melancholic notes on piano. The band is back in the game with Ceremonial Ineptitude, some quite dissonant track that unsurprisingly melts an extreme and heavy violente to more technical hints in company of Ryo Kinoshita (Crystal Lake, Future Foundation).. They continue with Drag me to Hell, a majestic and very dark song, on which the band welcomes Filip Danielsson (Humanity’s Last Breath, In Reverence) while offering an apocalyptic ambience, then Grotesque assaults us with super fast riffs. Leads bring this heady touch to a brutal basis, then I Prediletti: The Folly of the Gods allow us to enjoy its introduction’s beauty. Violence does not late to come back on the front row, but the track melts impressive ambience and pure rage to close this album in an as intense as effective way.

Aborted has nothing to prove since years, however the band still innovates. Of course, Maniacult will offer direct, strong and hooking tracks, but they add hints of technicality, intensity and even darker or more majestic sonorities to create a super powerful sound.