Vulvodynia, South Africa’s most violent band, is back with Praenuntius Infiniti, its new album. 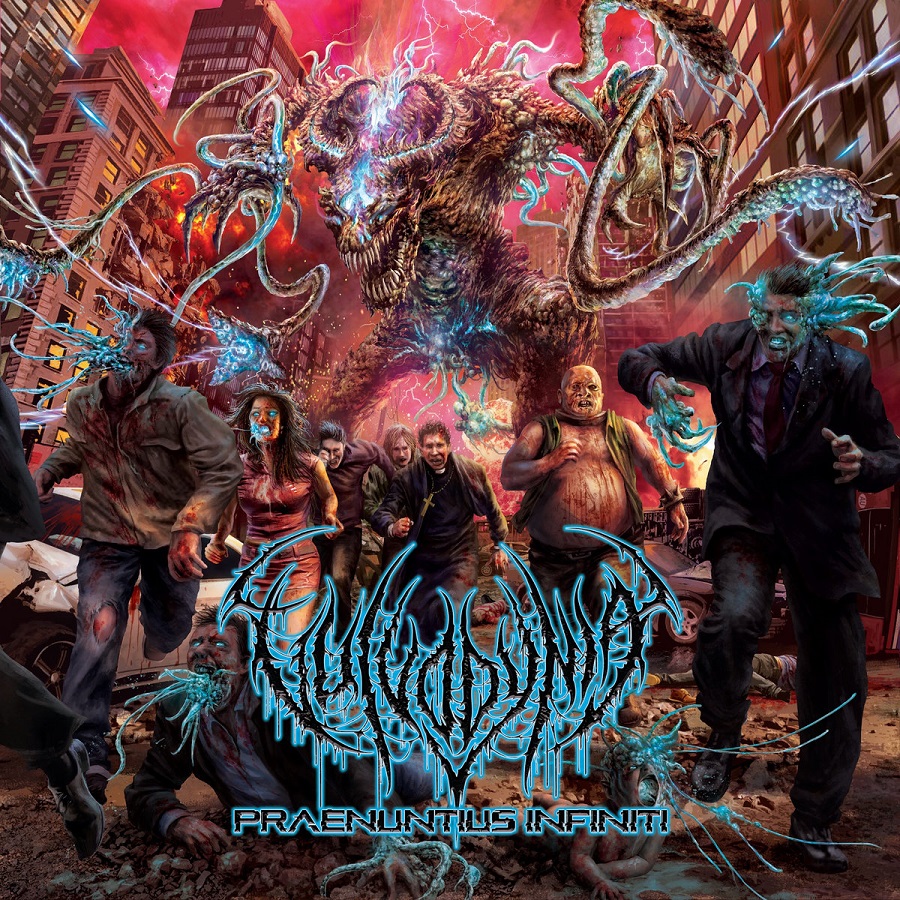 Helped by Ursula “Misstiq” Kurasik and Malcolm Pugh (Inferi, Demon King) for orchestrations, Praenuntius Infiniti begins with a worrying introduction that describes us this desolated universe before they continue to The Shadowy Descent of Gaia, a solid and massive track. The mix by Christian Donaldson (Cryptopsy) gives us a glimpse of the apocalypse while offering heady melodies under this layer of pure violence punctuated by moshparts, then the band connects heaviness and more technical parts to Eternal Wasteland of Galaxies. Dissonance joins rage, mainly during leads, then Praenuntius Ascends allows the band to welcome Jon Huber (Bludgeoned, ex-Pathology, ex-I Declare War) and Matti Way (ex-Disgorge, ex-Abominable Putridity, ex-Pathology) to increase violence while keeping this dark and mysterious dimension. Banquet of Enigmatic Horrors, Pt. 1: Terror continues to play on an oppressive ambience while letting the band pour its blackness and its heaviness, then Oliver Rae Aleron (Archspire) joins them for Banquet of Enigmatic Horrors, Pt. 2: Agony. The song is immediately more technical and dissonant, creating awesome accelerations to fit their guest’s universe, then the band takes an unhealthy dissonant break with Whispers of Calamity, quickly broken by The Seven Judges. The song is raw and offers this catchy and impressive sound as the same time, just like Ravenous Revolution, a composition that makes us want to enter the pit with fists in the air while enjoying this Slam Death with modern accents before the explosive A Cosmic Betrayal and its piercing harmonics. The song reminds us older tracks, then Jamie Graham (Viscera, ex-Heart of a Coward, ex-Sylosis) enters the band for The War Within and its heaviness, adding the song a Hardcore touch, then Jordan James (Disentomb) comes to destroy us on Forging the Deity Crusher. The song melts extreme heaviness and killer riffs, creating a powerful contrast between the two parts of this universe, while Funeral Ov The Gods comes back to this penetrating and hooking fog of sound. Deicidal Finality, the last song, offers worrying sonorities thanks to a clean guitar, then brutality comes back while keeping heady tones with an as worrying outro as the introduction was.

Vulvodynia evolves. While being still anchored in its violent and groovy basis, Praenuntius Infiniti develops more technical, more airy, darker and above all less automatic sonorities. But you can still tear the pit apart.