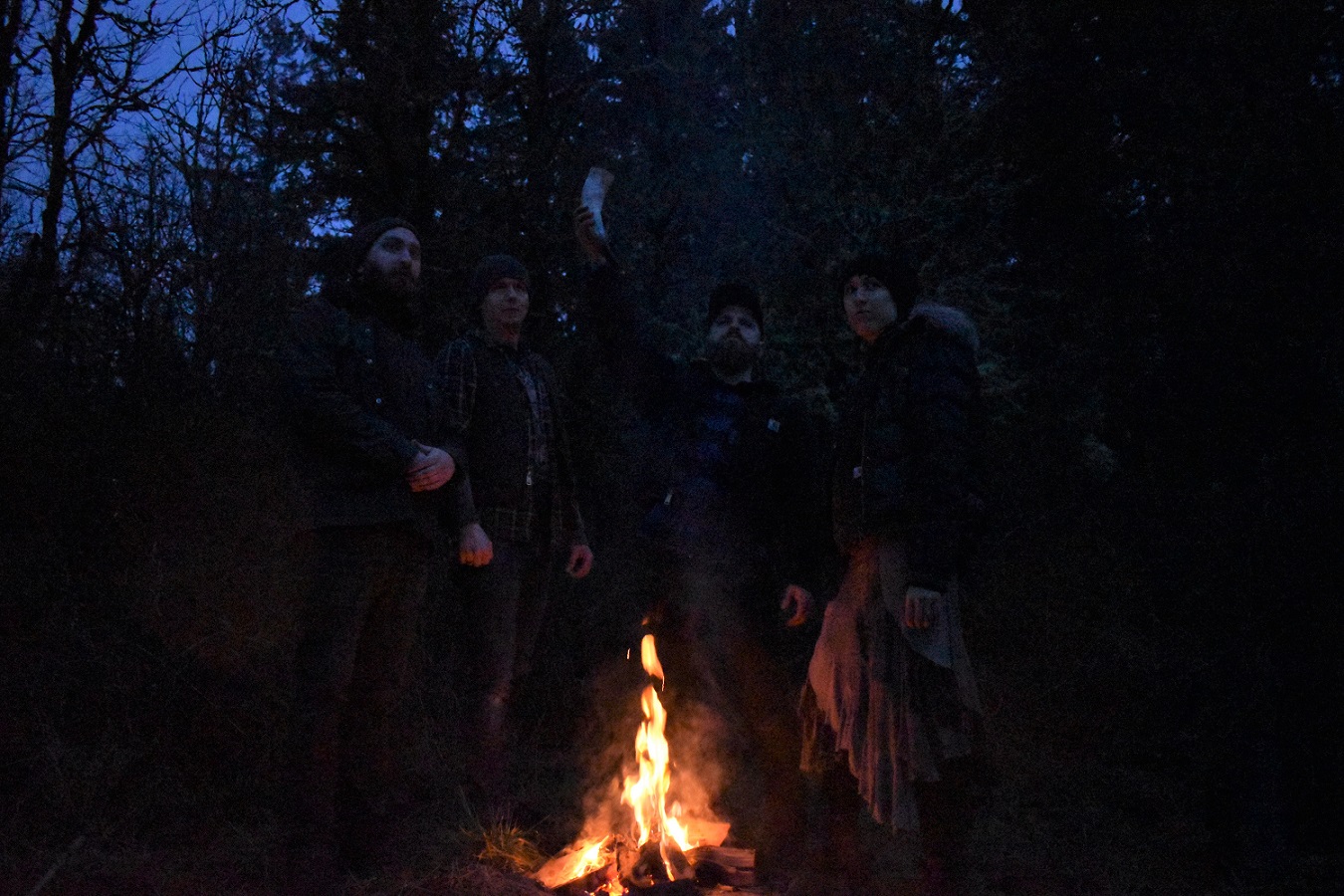 For the release of Alda’s fourth album, A Distant Fire, Michael Korchonnoff, the band’s vocalist and drummer, answered some questions about their art.

Hello and first of all, thank you very much for your time! Would you please introduce yourself and the band Alda with your own words?
Michael Korchonnoff (vocals/drums): Alda is a creative collaboration between Tim Brown, Jace and Steph Bruton, and Michael Korchonnoff (myself). We have been creating music and weaving ideas together for fourteen years, and hope to continue to do so for years to come.

What does the name Alda mean to you?
Michael: « Alda » is a word Jace discovered in the glossary of J.R.R. Tolkien‘s Silmarillion that simply means « tree » in one of Tolkien‘s fantasy languages. We chose it because we liked it’s simplicity, but also for it’s reference to growth, emergence, and nature. Since then we have learned it is also an Old Norse word that means « ancient », which works for us just fine. For us, the name has come to represent all of the passions and intentions we direct into our music, as well as the interpersonal bond that creates that music.

Your new album A Distant Fire is about to be released, how do you feel about it? Are you satisfied with what you’ve done on this album?
Michael: Generally speaking we are pretty proud of it, but when you are deep enough in a creative process it can be difficult to look at it objectively. We are aware of our strengths and flaws in this album, but we are very excited to finally be sharing it with our fans, and whoever else may hear it.

What can you tell me about the composition process? How did it happen? Was it different from your previous work?
Michael: The composition process began in the Summer of 2018, when we wrote the song Stonebreaker, which appears on the album. At the time, we were just getting back into the groove of writing and rehearsing, after a couple of slow years that followed some upheavals in our lives. After returning from tour in Europe in 2018, we had some renewed vigor to begin writing music again. The rest of the album was written between winter of 2018 through the Winter of 2019, and it was an intense period of rehearsal and writing for us. It is some of the most disciplined and musically adventurous we have ever been, and we sought to push our limits as songwriters and create songs that were more challenging for us to play than our previous work.

What is the story, or the concept behind this album?
Michael: A Distant Fire conceptually tells a story about humanity traversing through darkness towards a distant glow. This glow provides the only illumination to illuminate the path we are on, but we don’t know for sure if it is the glow of dawn that will greet us, or the glow of an inferno that will destroy us when we arrive. This is a metaphor for the process of navigating an apocalyptic present with an unknowable future.

I felt a lot of ice-cold and natural roots in the album, what is your relation with nature?
Michael: Our relation with nature is one of the most important things that guides our music. We all derive inspiration from being out in the wilderness, and Jace in particular has been a hunter and outdoorsman for many years now, and draws much inspiration from his time in the deep woods. The human destruction of nature, and the big problems such as mass extinction and climate change are also subjects that we reflect up and write into our music.

I personally think the song that represents the most the artwork is Forlorn Peaks. What was your guideline for the album? What is its link with your music?
Michael: Jace designed the concept for the cover art and interior art for the album, and the paintings were created by our friend Craig Strother. The human skeleton on the cover art follows the « memento mori » pattern also found on the album covers of Tahoma and Passage, which represents our mortality and the eventual futility of human striving. The landscape depicted in the art is inspired by places that Jace has visited during his long hunting and camping trips, and the smoke and fire in the background represents the impending devastation that will visit the natural world (and the human world) in the coming years.
I can see how associations can be made between the cover art and the song Forlorn Peaks, but the art is intended to represent the album as a whole, rather than individual songs. However their are pieces of each song represented in the album art, so it all fits together as a (mostly) cohesive whole.

Last year, Covid-19 crisis fucked the world up. How did you deal with the situation as a band? Did it have an effect on this new album?
Michael: The pandemic definitely affected the band in the sense that we have had to postpone two European tours, and that the mixing, mastering, and physical pressing of the album have all experienced delays at some time or another because of chaos created by it. If everything had transpired according to our original schedule, A Distant Fire would ideally been released in the Fall of 2020. Fortunately the pandemic did not affect the writing and actual tracking of the album, as we completed nearly all of the tracking by February 2020, right before the pandemic struck. One significant thing is that we have not performed live for nearly two years, largely because of this situation, which is the longest period of time without a show we have ever experienced. 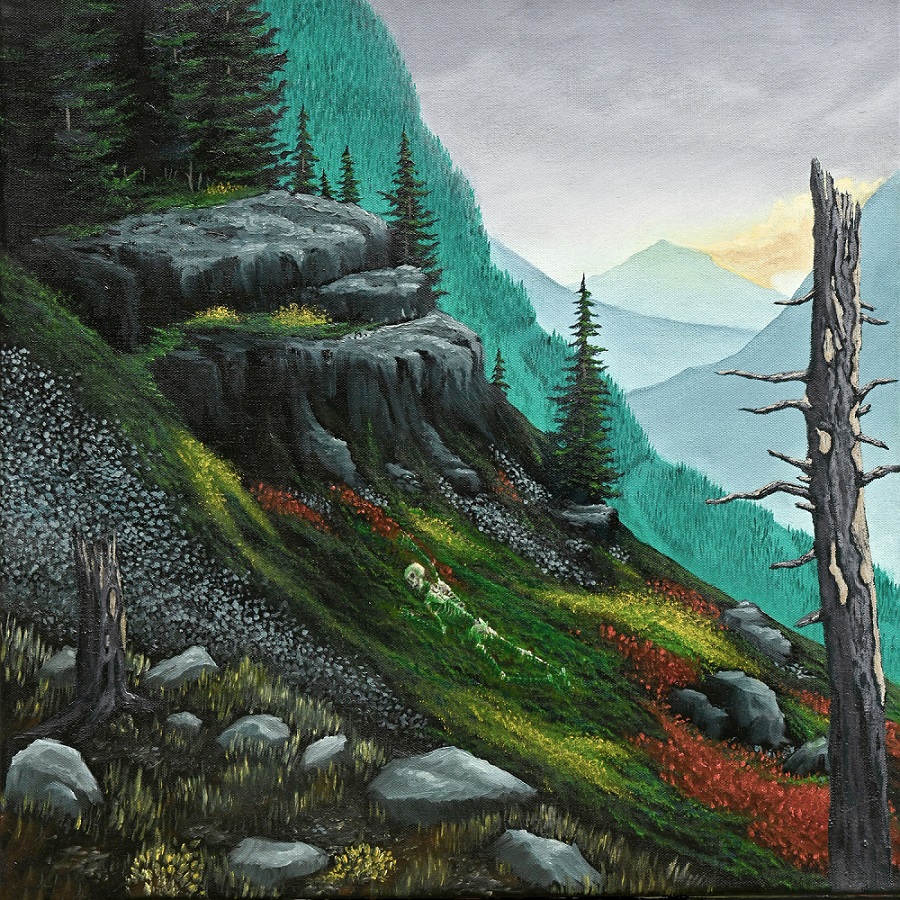 Maybe you already have some plans for the band’s future?
Michael: We plan to continue to create music together, and hopefully travel and tour again. Our bond as friends will remain regardless, but as far as Alda the band is concerned, only time will tell.

What led you to Metal music and to Black Metal music back in time?
Michael: It is different for each member of Alda, but in my case I was introduced to Black Metal by friends of mine in the local Punk scene in Tacoma, Washington around 2001 or so. I think the first Black Metal album I had was a bootleg cassette copy of Satyricon‘s Shadowthrone. I was always looking for stranger and more extreme music, and Black Metal instantly resonated with me when I first heard it. Jace discovered a lot of the Black Metal music that inspired him in a record store in Tacoma called Rocket Records that was managed and stocked by a friend of ours. Tim and Steph were both introduced to this music either directly or indirectly by Jace in our small friend group in Eatonville, where we all went to high-school together.

The band was created in 2007, and all members are here from the beginning. How do you keep the flame alive inside of you to continue the band?
Michael: I think that loyalty and commitment to each other has a lot to do with this. If we were the kind of band that was concerned with being more « professional » and touring and recording more often, we would have had to be more flexible with membership. That would massively impact the sound and spirit of Alda, and it really would not be the same band. The essence of Alda is so strongly tied to these same four members, the band might not exist if one of us left.

Maybe you already heard about the french Metal scene? Which french bands do you know and like?
Michael: We are only aware of a handful of the more well-known French bands, to be honest. We have enjoyed the music of Amesoeurs, and we performed with Alcest in Seattle several years ago. Personally, I have been very interested in the work of Deathspell Omega in the past, and I still follow their work. We are aware of some of the older underground work of the Les Legions Noires, and we listened to some of that music in our younger years. It would be great to perform more in France someday though, and get to know more French bands. 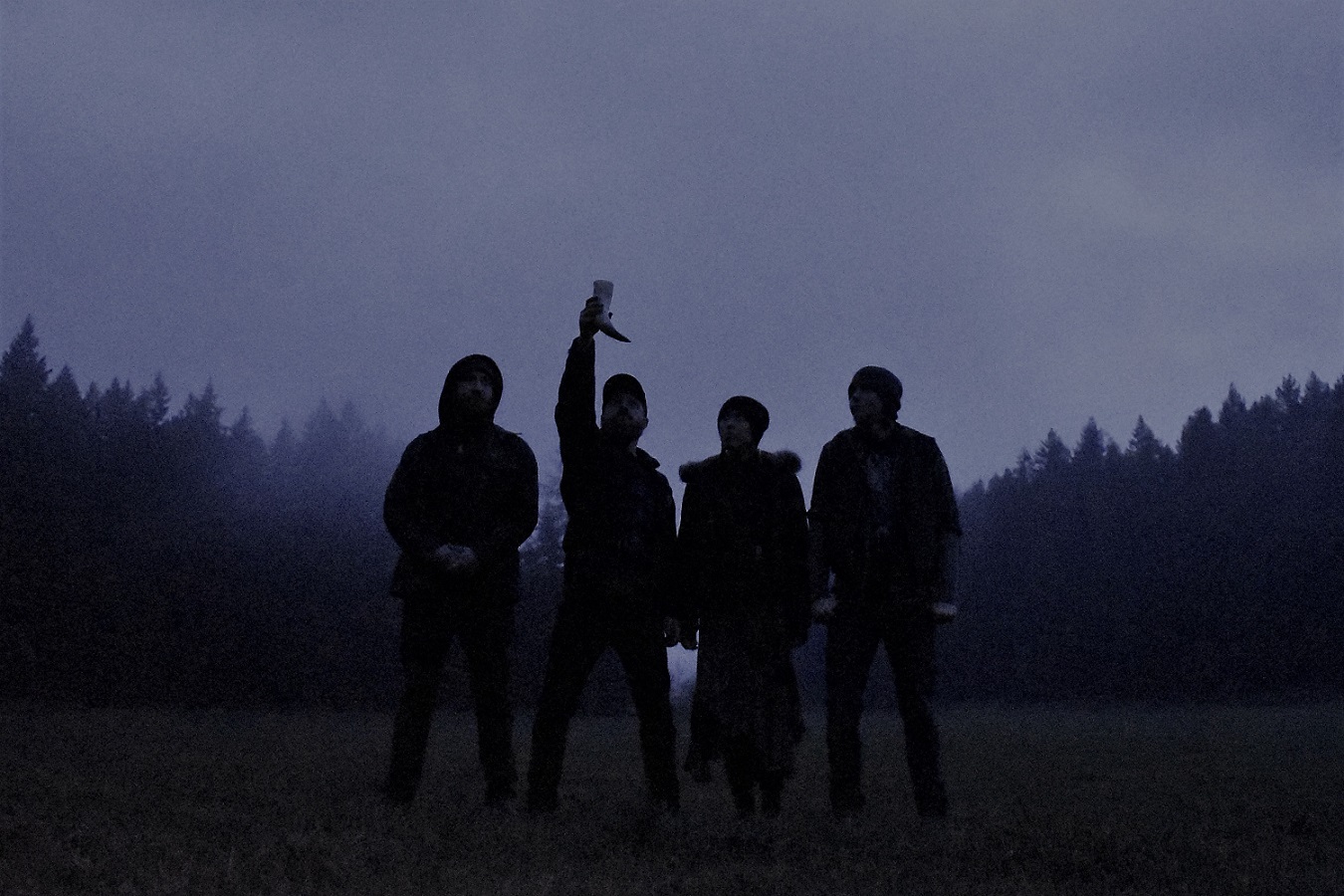 Are there any musicians or bands you would like to collaborate with?
Michael: There are so many musicians that we respect and admire, it would be really hard to list all of them though. Collaborating with Alda would be a hard thing to work in though. We have a method of creating music that is very specific to the personal chemistry between the members of Alda. Anyone from outside of the band would have to be very patient if they were part of that process.

The only time I saw Alda on stage was in Paris, France, back in 2018. Do you have special memories from this show or tour?
Michael: We have many special memories from that tour, more than we can recount here. That show in Paris is significant because to date that has been our first (and only) show in France, and it was also the first show on that tour when we shared the stage with Uada. It was a fun show, and we remember it well. Hopefully we will get the opportunity to play more places in France someday.

Last question: which bands would you love to tour with? I let you create a tour with Alda as opener and three other bands!
Michael: We have talked with Falls of Rauros about possibly touring together, and we would absolutely love it if that became a possibility someday. We’ve played with them before, they are great people and incredibly talented musicians. As for the fantasy tour you mention, it is hard to say. Every member of Alda might have a different list!

That was the last question for me, so thank you very much for your time and your music, last words are yours.
Michael: Thank you for interviewing us and for offering your thoughts on our music!