After eight years of absence then live shows, the swedish band created by Peter Tägtgren (vocals/guitar, Pain, ex-Bloodbath, ex-Lock Up, ex-Lindemann, ex-The Abyss, ex-War) in 1991 (or 1988 under the name of Seditious) and completed by Mikael Hedlund (bass, ex-The Abyss, ex-War), Horgh (drums, Immortal) and Tomas Elofsson (guitar, Berzerker Legion, ex-God Among Insects), introduce us to Worship, its fourteenth album. 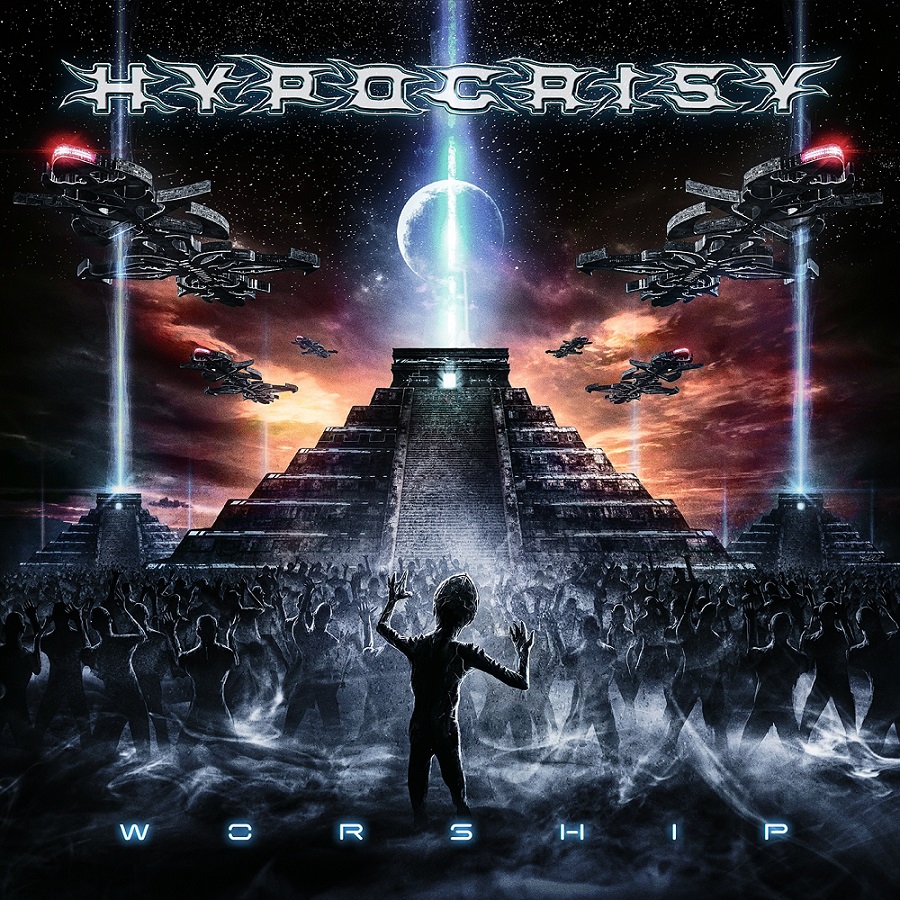 To be honest, I expected the album. Highly expected. The artwork by Blake Armstrong (In Flames, Carnifex, Kataklysm…) only emphasized my impatience. During the introduction of Worship, the first track, I just couldn’t wait anymore, and when shrilling but majestic leads came, I knew my patience would be rewarded. The first scream, quickly followed by a solid rhythmic, then by mad leads only confirm my thoughts: the sound is exactly the same than before. Rage doesn’t fade and melodies are as corrosive as piercing, just like on Chemical Whore, the song chosen to introduce the album. Slower and more weighing, it shows us the band still know to melt catchy sounds with a haunting heaviness, then Greedy Bastards reconnects with aggressive sonorities from the swedish scene, powerful jerks and Hypocrisy’s very own sound. The vocalist’s voice is once again inimitable, then Dead World comes to bluntly crush us with a powerful groove. The song melts aggressive melodies and a modern heaviness that counts a lot on bass, while We’re The Walking Dead develops a soaring and hypnotic sound. Once again, they’re the only ones who know how to create this kind of weighing and majestic atmosphere, strengthened by powerful and understandable vocals. Brotherhood of the Serpent develops a hooking heaviness with melodies and a dark ambience, then Children of the Gray offers this addictive introduction that makes us only wait for raw violence. And I wasn’t wrong, the rhythmic offers this catchy progression with heady melodies and imperial vocals, then Another Day comes to break necks. The song is the most raw and straightforward of the whole album, playing on effective palm mutes and energetic jerks, then it leaves us on They Will Arrive, a slower composition that also takes advantage of those effective patterns. Piercing screams walk with powerful growl on aggressive melodies, then Bug in the Net spreads haunting tones again. Majestic melodies shroud us into this dark cocoon, then Gods Of The Underground signs the end of the album. The song is some kind of melting between piercing melodies, solid rhythmic, diversified vocal parts and transcending leads. And that’s all we needed in the end.

Once again I’ll be honest: I love Hypocrisy. I listened to their discography so many times. And I was eagerly awaiting Worship. The fan that lives in me is not disappointed, as the band still knows to use its weapons of choice, which are a hooking heaviness, piercing melodies and impressive vocals. Just listen to it.