Wombbath ends the year with its sixth album.

Created in Sweden in 1990 by Håkan Stuvemark (guitare/basse, Grisly, Pale King, Skineater, ex-In Thy Dreams), the band began with other names, then went on hiatus after two EPs and an album. 2014 marks the band’s comeback, and it’s with Jonny Pettersson (guitar/vocals, Heads for the Dead, Massacre, ex-Just Before Dawn, ex-Skineater…), Jon Rudin (drums, Just Before Dawn, Pale King…), Thomas von Wachenfeldt (guitar, Wachenfeldt) and Matt Davidson (bass, Repulsive Vision) that Agma is released in 2021. 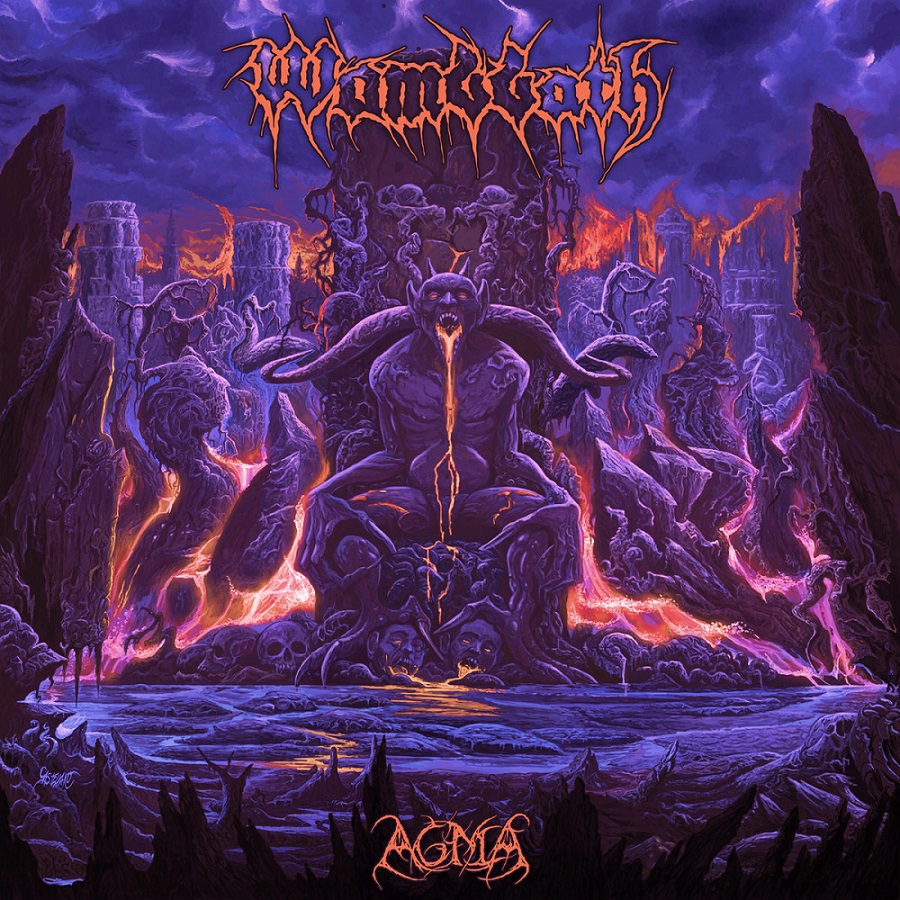 The Law of Everything immediately throws us by force in this raw universe of which sound is filled with HM-2, but also weighing and aggressive howlings. The rhythmic is hooking, just like At The Giant’s Feet and its bloody harmonics. The song plays on straightforward effectiveness and greasy sound, but also on tearing backing vocals on the end of the track before The Seventh Seal brings a dark dissonance. A heavy groove grafts itself to the sound before Inquisition Reborn and its Old School influences strikes, highlighting sharp harmonics under the thick basis. The band irremediably hooks us, just like with Blindly They Will Follow and its abrasive fastness, which turns to a heady heaviness before A World Of Destruction and its weighing groove. The track allows no doubt over its influences, devastating everything on their path, while Misantropi Och Förakt offers sharp melodies to accompany raw strength, and we also have them on Breathe In The Flames, a very effective track. The rhythmic knows to make place to more majestic parts, like this final which drives us straight to The Age Of Death and its intense contrast between soaring orchestrations and apocalyptic heaviness. The sound clearly picks into the most powerful of both parts, then Oh Fire Of Hate crushes us under its dissonance and its unhealthy energy. Raw roots are out for this song with piercing leads, then In Decay They Shall All Fester opens the gates to worrying sonorities which accompany the heavy rhythmic and powerful howlings. Some more savage parts appear before Divine Pain and its heady modern sonorities, creating a contrast with the leads’ dark sound, like on The Dead And The Dying which injects Blackened Death Metal influences to this unhealthy sound. Departure From The Light offers a haunting slowness to walk with the weighing rhythmic and ghostly backing vocals, while Scorned Existence goes back to Death Metal’s basis. Dirty and energetic, the song however let place to airy and worrying influences, just like a mystical effectiveness and powerful choirs, then the album ends with On A Path Of Repulsion, a fast and brutal track. Once again, we have voices in the background, feeding the oppression, which can once again be found into the dissonant rhythmic before the final.

Wombbath continues on its charge and keeps an abrasive Swedish Death Metal. With Agma, the sound sometimes goes a bit far from pure roots, offering ravaging melodies, airy leads or an oppressive blackness, strengthening its interest to me.