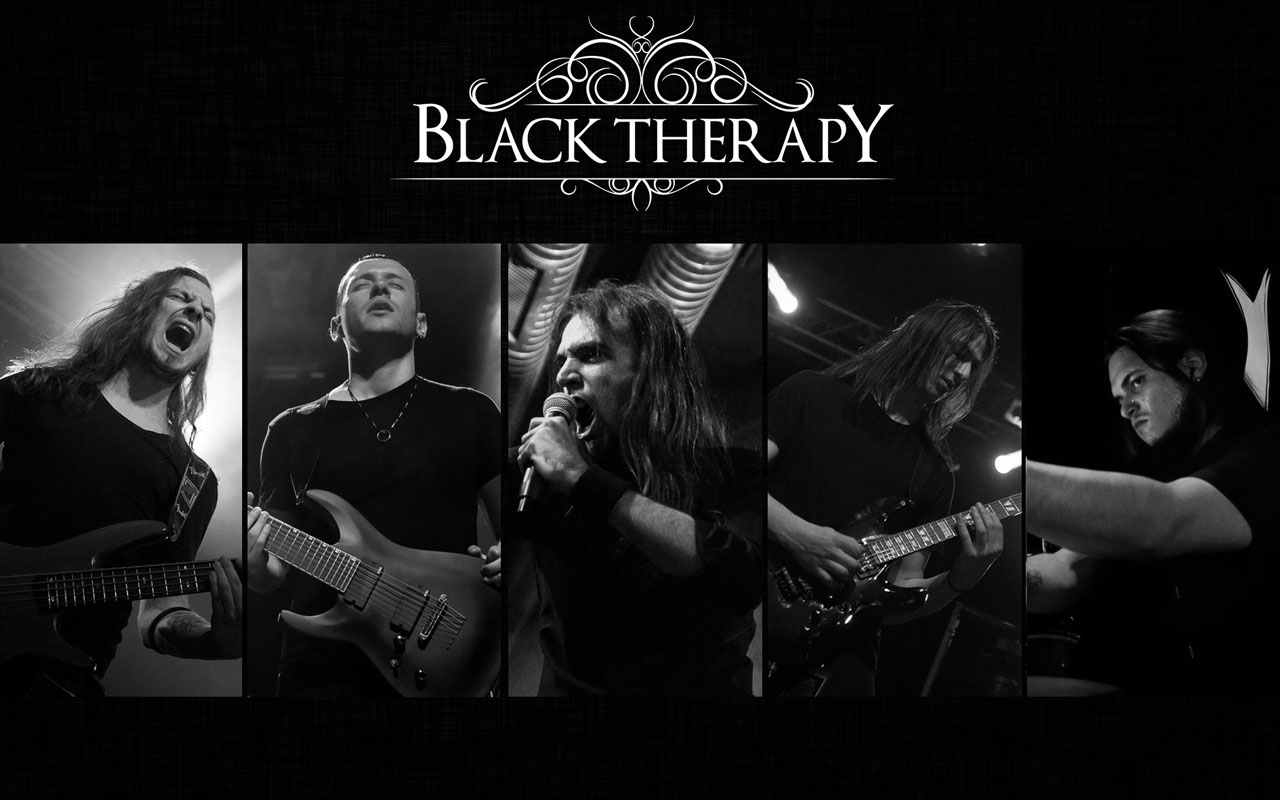 Hello and first of all, thank you very much for your time! Could you please introduce yourself and the band Black Therapy without using the usual “Metal” labels?
Giuseppe Massimiliano Di Giorgio (vocals): Hello ! This is Giuseppe, vocalist of the band. If I can’t say we are a Melodic Death Metal band (oops, I said it ! Ahah) I’d say we have some sort of balance between aggression and a more doomy atmosphere. We appeal to those who enjoy the melancholic side of music, but also to those who like faster-paced and harder-hitting tracks.

Do you remember where does the band’s name come from, and what is its link with your music?
Giuseppe: Lorenzo and Daniele (previous guitar player) came up with the name of the band when the band didn’t even exist yet. Black has always been the color of Metal, and so the name refers to a music therapy for the listeners.

You are about to release Onward, your fourth album, how do you guys feel about it?
Giuseppe: We feel great, we are really fond of this album and cannot wait to hear what the listeners think of it!

How could you sum Onward in three words? Do you have a song which is special for you on this album?
Giuseppe: If I had to choose three words : angry, aggressive yet emotional. Together holds a very special place in my heart, if you listen to it or read the lyrics you’ll easily understand why.

How does the composition process happen? Was it different from your previous releases?
Giuseppe: Despite the pandemic, the composition process was quite similar to that of our previous releases. Lorenzo is the main songwriter, but this time Andrea also composed a lot of songs and riffs. When the music is done, I write the vocal lines and the lyrics. Lorenzo is also a sound engineer, and for this record we decided to do everything in his studio, he also mixed and mastered the album. 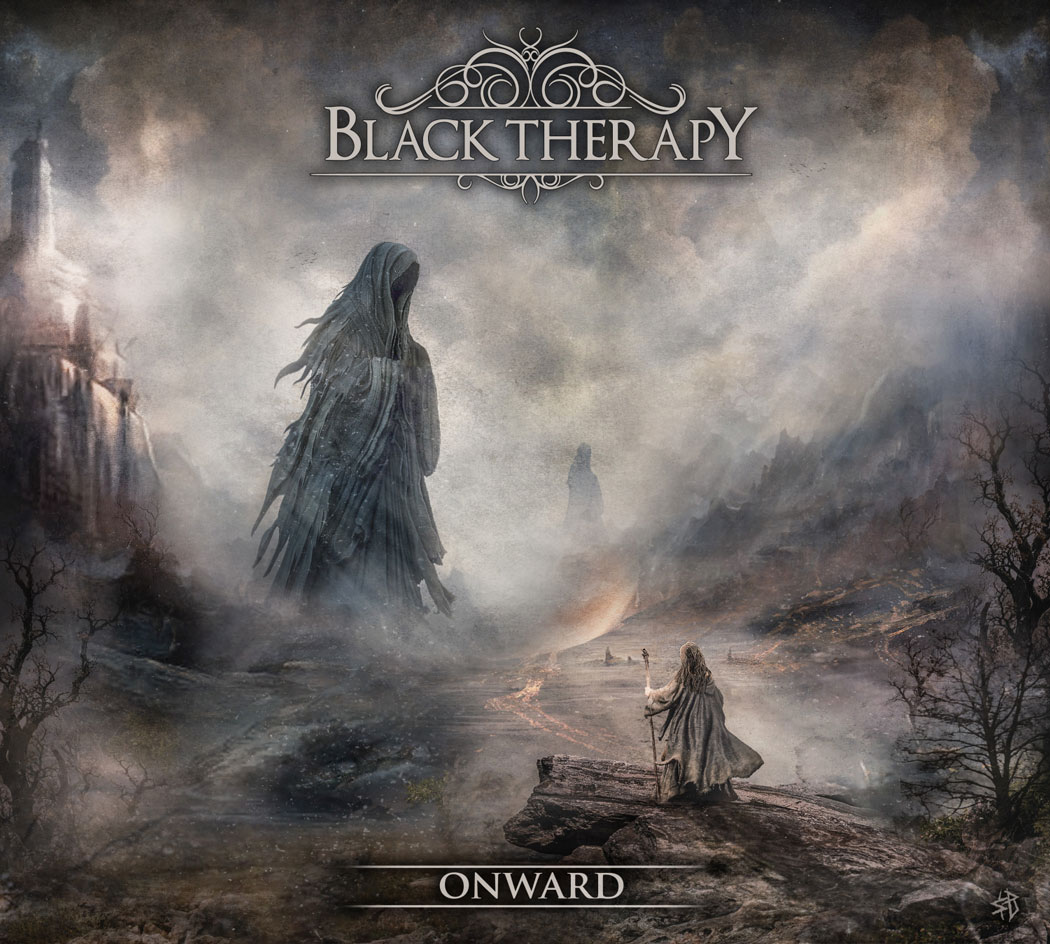 Did you have some guidelines for the artwork?
Giuseppe: We had some guidelines but in the end we went for something completely different and we are really satisfied with it, Simon Bossert created a great artwork.

I definitely feel a melting of Old School basis melted to new elements, like clean vocals, as well as the appearance of two guests, how could you describe the band’s sound evolution?
Giuseppe: I feel like this time we went for a more aggressive approach compared to Echoes, without ditching the melancholic aspect of our music of course. I decided to sing clean on a couple of tracks because I think that clean vocals fit these songs, it was something natural. We always write the music that we’d like to hear, and I think that is a very important thing.

How did you get in touch with Filippo Palma and Chiara Filippelli?
Giuseppe: Filippo was the vocalist of Lunarsea (on the albums Route Code Selector and Hundred Light Years) and we have been knowing each other for years. I always liked his voice, so I just asked him if he’d like to sing on our new record, and I’m happy he accepted to sing on Betray My Ideals. We also needed clean female vocals on A Quiet Place and Chiara is a friend of Lorenzo, so he asked her to do it, as simple as that.

How do you decide which vocal part to use?
Giuseppe: I listen to the songs several times and figure it out in my mind – what would sound good here ? – What there ?. Then I try some lines with random words and if it’s good I write the lyrics.

The band has been alive since 2009, and faced some line-up changes, how do you deal with those hardships as a band?
Giuseppe: In our case, I wouldn’t really speak of hardships. Fortunately everything went always smoothly.

Since 2020, Covid-19 crisis fucked a lot of things up, how did you face the situation as a band? Did it have an impact on the album?
Giuseppe: Well, we were planning some shows to promote our previous record but the pandemic forced us to stay still, so we decided to use this opportunity to write a new album and take all the time it needed to refine every little detail.

Do you already have plans for the future after the release of the album?
Giuseppe: We’ll have our release party here in Roma on the same day of the album release (June 10th) but we are still working on future shows.

What can you tell me about the evolution of the Metal scene around you?
Giuseppe: Rome is… difficult. I can’t say that there is a real Metal scene, especially in our genre. But there are really good bands here in Roma, even if they struggle to emerge.

Do you think you still improve yourselves as musicians?
Giuseppe: Yes, improving is part of the journey. Whenever we listen to a new record or we see a band playing we take the opportunity to absorb and elaborate everything for ourselves.

What are your best and your worst experiences as a musician ever?
Giuseppe: Tough question ! Our European tours with Dark Tranquility and with Wintersun are among the best experiences we ever had. One of the worst happened during the Wintersun tour:  we were stopped at the Belarus border and we were forced to wait all night until they finally checked our van, saw that everything was okay and let us go.

What led you to the Metal universe back in time? What was the very first album you ever bought?
Giuseppe: My first introduction to a proper metal album was Master of Puppets by Metallica. Shortly after I dug a bit and found out there were bands using growling/screaming vocals and I felt in love with that kind of sound. Death, Dark Tranquility and Dimmu Borgir were the first three bands I listened to that were using this style of voice.

What do you know about the French Metal scene? Which French bands do you know and like?
Giuseppe: Apart from the obvious Gojira I don’t really know much, but we shared the stage with a very cool band called Svart Crown which I recommend to those listening to more extreme music.

I was lucky enough to attend one of your shows back in 2018. You played in Paris, as openers for Dark Tranquility. What memories do you keep from this show and tour?
Giuseppe: The whole tour was awesome, and the last night was in Gothenburg, the hometown of Dark Tranquility, which made it very special! I have great memories of the Paris gig too : playing at the Moulin Rouge, such an iconic venue, was amazing. It was a sold out show, with a great response from the crowd, I definitely loved it.

What if I ask you to compare Black Therapy’s music with a dish? Which one and why?
Giuseppe: I know it will sound banal, but Pizza is the obvious answer, because we are from Italy and you can never have enough pizza, just like you should never have enough of our music ahah.

Are there any musicians or bands you would like to collaborate with?
Giuseppe: Personally, I would love to have Mikael Stanne (Dark Tranquility) singing with me on one of our songs!

Last question: which bands would you love to tour with? I let you create a tour with Black Therapy as opener and three other bands!
Giuseppe: Dream tour : Dark Tranquility, Swallow The Sun, Omnium Gatherum, Black Therapy.

That was the last question for me, so thank you very much for your time and your music, last words are yours!
Giuseppe: Thank you Matthieu, it was a pleasure! Hope to see you and all our friends from France very soon!