Entrails is back to vomit its Death Metal with a seventh album.

Created in 1990 in Sweden, the band didn’t release anything then stopped in 1998 before coming back in 2008. Today, Jimmy Lundqvist (guitar), Pontus « Penki » Samuelsson (bass/vocals, Gravestone), Arvid Borg (drums) and Markus Svensson (guitar, Nuclear Salvation) offer us An Eternal Time of Decay on Hammerheart Records. 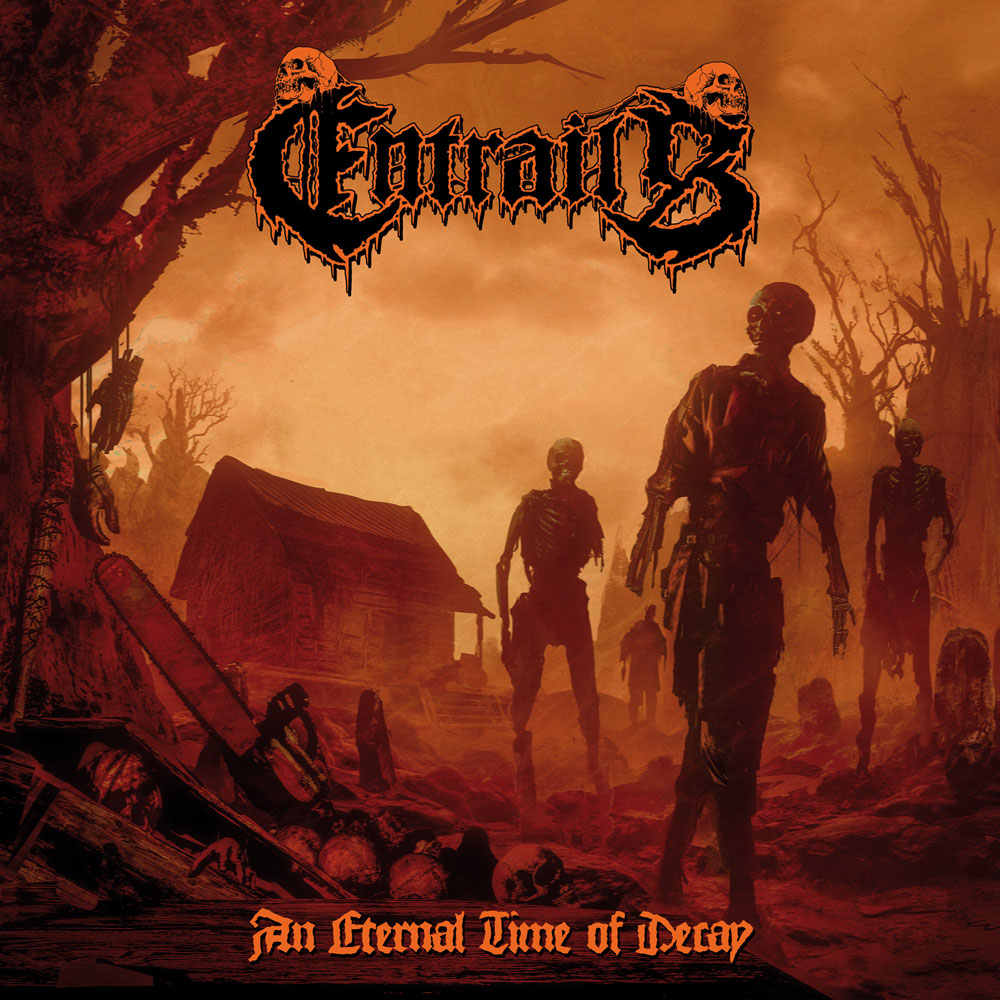 We start with the ominous An Eternal Time of Decay, the eponymous introduction, which slowly oppresses us before the thick sound of Die to Death takes over with piercing leads and a catchy rhythmic. Powerful screams land with a bang on this violent base soaked in Swedish Death roots, just like on Fear the End and its morbid energy. The catchy blast allows the groovy riffs to make us shake our necks while bludgeoning us continuously, then the band will place some dark leads before the end, which leads us to The Dead and its intro sample. The rhythmic soon arrives and crushes us with very old school sounds and screamed choruses that perfectly fit the atmosphere of the track, then Slayed to a Pile of Flesh continues in this aggressive atmosphere with heartbreaking leads. Although the tempo is brought to slow down slightly on certain parts, we keep this permanent rage in the rocky voice, then Open Casket Feast makes us immediately sink back into this bloody and devastating ocean. Riffs are as Old School as they are effective, making this track one of the most devastating, then the sound gradually fades away before Dead by Evil offers us a few horrific notes before releasing the fat and groovy riffs. The chorus is simple but incredibly effective, and it also lets the musicians place some Grind influences as well as more melodic harmonics, while Inverted Graveyard goes back to the darkness and disturbing elements. The track remains catchy and effective, as does Autopsy and its jerky parts that contribute to the strength of the unhealthy and fat riffs. The album continues with the powerful Reborn in Worms which combines a raw and straightforward violence which barely slows down to place heavy refrains or a mysterious solo, then it ends on Possessed and its visceral rage that will be one of the best weapons of the band to stir the pits of the world.

Entrails has never disappointed me, and it is not An Eternal Time of Decay that will change my opinion about the band! The musicians handle their Swedish roots to perfection, creating a wave of raw violence that may slow down or become more melodic, but always remains fat and catchy.