Released last year, Downfall Rising is the come back album from the Swedish band Wombbath, after a 19 years old gap.

The band suffers of some line up changes, so there is 3 different singers on the record. Hopefully, there’s no bad feeling about it. Every singer’s voice matches perfectly with the band’s sound. 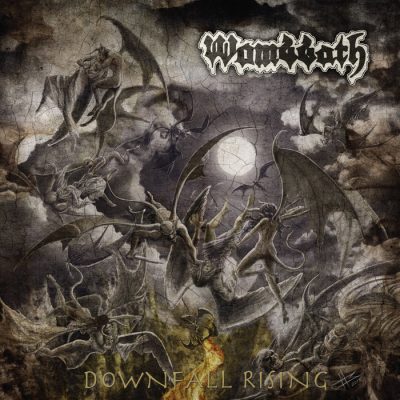 This record’s opening song leads us in a freaky atmosphere just before to rush on a powerful Under Apokalypsens Svarta Vingar. The next song will upgrade the violence’s level, therefore the followings are granted by a little piece of introduction to let us breath a bit before sinking into the record again.
Paid In Blood is an exception to this new rule by being brutal at the first second. The record ends on Abandoned Furthermore, a theatrical outro, and it is also the slowest song of those 31 minutes of pure free violence.
It’s a successfull come back for Wombbath, who must be oversaw during the next years.
Bloody tasty riffs, powerful voice, perfectly mastered solos… I’d like nothing better !
Special mention to I Am The Abyss, in my opinion. If you really like Death Metal, you MUST listen to this album !