Charles Michael « Chuck » Schuldiner (20th best Metal guitarist of all times by Guitar World) is the man that popularized saturated singing (scream and growl) in Metal.
Scream Bloody Gore, released in 1987, is one of the firsts Death Metal records, and Death‘s first one (formerly Mantas).
The guitar and bass playing are very technical at this time (Chuck Schuldiner recorded both) and is an inspiration for many guitar players, Death Metal or not.
Lyrics are mainly about dark topics : death, gore, horror, etc…
From the first track, the sound is typical : screaming but understandable voice, quick and sharp riffs, powerful drum (blast). 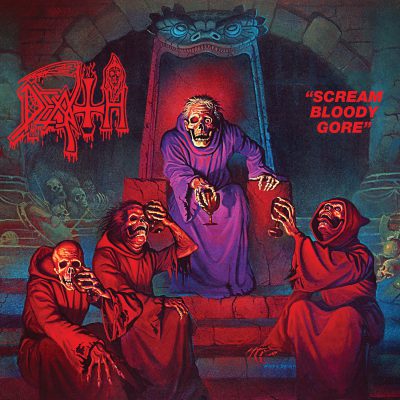 Death is innovature and does it well. The album cover composed of skeletons on the throne of what looks like a necropolis helps to create the band’s atmosphere.
Piercing riffs are chained to each other : Zombie Ritual, Denial of Life, Mutilation, Baptized in Blood, Scream Bloody Gore…
Evil Dead‘s introduction (the titel reminds the eponymous movies released in 81 and 87) is really awesome beacuse precursor of the following chaos.
Without being concious, Death just created what we call later Death Metal. They are like « Black Sabbath of Death Metal ».
Chuck Schuldiner is unfortunately, for the ones who ignore it, deceased because of a pneumonia the 13th december of 2001, after 2 long years of battling against a brain tumor.