Demigod, released in 2004, is nowadays (with other Behemoth‘s releases) a musy have when you talk about Black-Death Metal.

Surrounded by Inferno on drums and for the first time Orion on bass, Nergal (voice/guitars) compose with some help by Krzysztof Azarewicz on the lyrics an awesome powerful pagan manifest. Notice that Karl Sanders (Nile) appears as guest for XUL‘s solo. The order of the tracks tells a story. 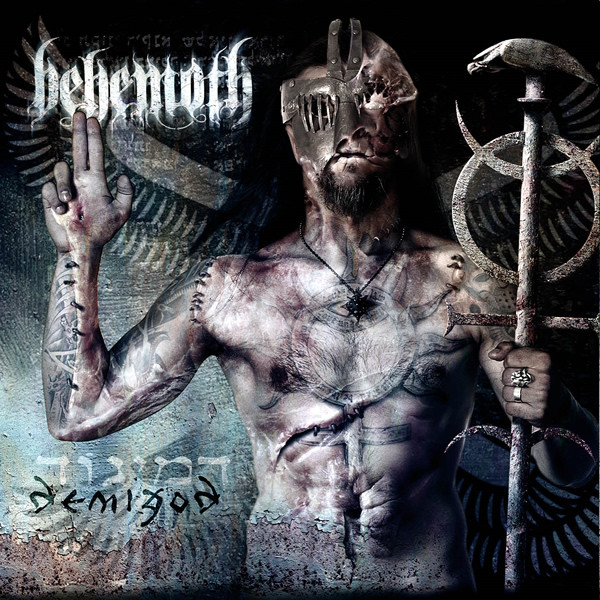 The album starts with the mesmerizing introduction of Sculpting the Throne ov Seth. The violent and reworked song will fits perfectly with Nergal‘s incantations. The eponimous track, Demigod, will delight orchestrals and catchy riffs fans. The speed of delivery is the main weapon for this track, which contributes to the band’s fame.
Then the second famous track : Conquer All. This track could be enough to love the whole album. Pure violence under an outstanding melodic part, with Nergal‘s and Orion‘s screams. A video clip was created for this one. The Nephilim Rising is from the same mold : violence, but with melody inside.
Towards Babylon is quicker, the bands explodes with this powerful track. Before Aeon Came‘s beginning reminds us atmospheric parts, which is usefull for the song’s powerful uprising. Mysterium Coniunctionis (Hermanubis) is in my opinion the song who’s lyrics were the most worked on. The instrumental part will follow the same path, but this track is mysterious and darker than the other ones.
Then comes XUL, the brutal one. Karl Sanders‘ playing is easily recognizable on this solo, and gives the track another dimension. Nile plays Death Metal based on esoteric elements from old civilization to construct their music. It is natural that the musician’s collaboration is easy. Slaves Shall Server stays in a violent path, with once again some incantations as introduction. This track will have a video clip too. For a long time it was played on stage.
The Reign ov Shemsu-Hor is the last track. Composed of three parts, it’s also the longer one. The first part is an instrumental one, the second part is a masterpiece of both brutality and beauty. The last one shall be preceded by an intense lead guitar part. The record ends on Nergal‘s guitar deep rumble.
Keystone of the band’s discography, even if they don’t really like to be classified, Demigod don’t sound that old despite its twelve years old. This album is, in my opinion, competing with The Apostasy (2007) for the best Behemoth‘s album.