You really think you know what’s Chaos, right ? Until you have listenning to Impaled Nazarene, you don’t.

Impaled Nazarene, it’s just 26 years of pure violence from Finland. It’s not their first record, but Ugra-Karma is the most representative and acclaimed by fans.

Released in 1993, Ugra-Karma unleash hords of black metal fans as dividing puritans minds. Impaled Nazarene, it’s Satan, Sex and Violence (mostly, even if some politic/patriotic lyrics appeared later in their discography). Now welcome to the black metal’s most punk band. 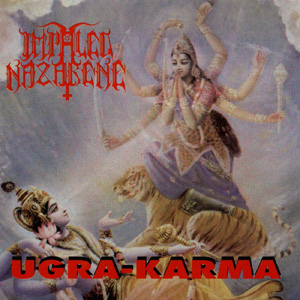 Goatzied, it’s just a moment of violence, hen atmospheric part. During not even two minutes. The Horny and The Horned, a bit longer, is a great black metal track. Slutti666‘s glazed voice (Mika Luttinen) fits perfectly to this wave of power. Sadhu Satana is based on the same mold : bloody tasting riffs, powerful and greasy voice…
Chaosgoat Law will use the high-pitched sounds of Mika Luttinen‘s voice. The singer is able to scram like a real beast. Hate, it’s the time to see how gifted the musiciens are (Kimmo « Sir » Luttinen on drums, « Jarno Anttila » on guitar and Taneli Jarva on bass), during almost six minutes. The best track in my opinion. In the song, there’s some samples from the movie Au Nom de la Rose, directed by Jean-Jacques Annaud, a french director.
Gott ist tot (Antichrist War Mix) is a bit particular. The song isn’t bad, but with this mix it sounds like an industrial black metal premise.
Like any other records at that time, the album is splitted into two parts (vinyls’ two sides). Coraxo is just an introduction to Soul Rape, the album’s other masterpiece in terms of pure and meaningless violence. Kali-Yuga‘s bass tone is highlighted, whereas Cyberchrist contains a sample from the Gremlins movie, in addition to be an excellent track.
False Jeovah comes back to fast tempo and more powerful voice, while Sadistic666/Under A Golden Shower is composed with the influence of black metal roots, with the Impaled Nazarene insane touch.
Even if Ugra-Karma isn’t my very favorite (just because Manifest is perfect), Impaled Nazarene were impressive with this record. 23 years later, some track still haunts the band’s setlists.