Born in 1990 and after six records, it’s with heavy hearts that their fans learn that the greek band Septicflesh splits in 2003. But the unexpected happens in 2007 : they’re back with symphonics elements in their powerful Death Metal. Created by Spiros « Seth » Antoniou (bass, harsh voice), his brother Christos Antoniou (guitar, orchestrations) ans Sotiris Vayenas (guitar, clean voice, lyrics), the most known drummer is Fotis Bernardo but Kerim « Krimh » Lechner is now their full time drummer since the end of 2014.

The first album of this reunion is Communion. The most know one, but also the most loved one, which allows us to learn that their break didn’t damage theur creativity and that they’re ready to take musical risks to pour their riffs on the world. Widely based on the antic mythology, The City of Prague’s Philharmonic Orchestra records all orchestral parts, and Seth designs the cover artwork. It’s time to wake the ancient Gods up. 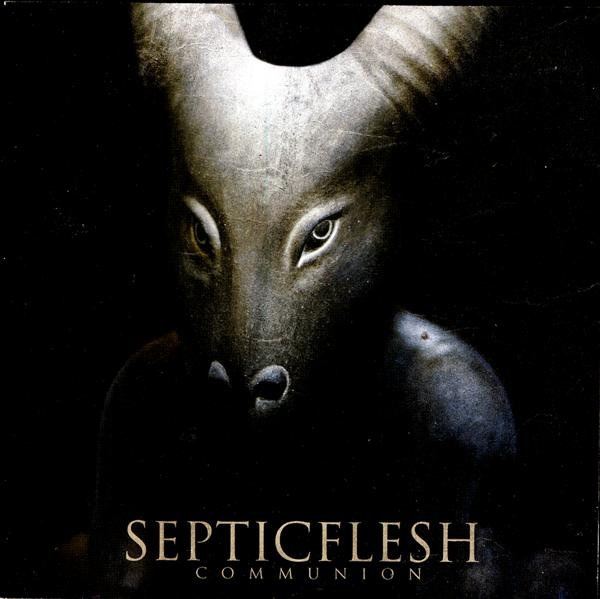 The record starts on Lovecraft’s Death‘s torturated riff. If the voice is one powerful as hell, it is widely comprehensive. This hommage to the author contains a huge amount of references to his books. After a ring bell we discover Anubis. An atmospheric introduction with orchestrations leads to simple but efficient riffs until the God’s call, with a very rare beauty for a Metal band. The song ends on the hypnotic final riff.
Only Communion can take us back from this charm. Maybe the instrument power and the precision aren’t enough ? Just wait for Seth‘s voice to take a definitive view. The hammer smashing blast comes back on the chorus, then leaves us to Babel’s Gate. Another jewel with unsophisticated riffs that highlights the drum/orchestration duo, it’s another time on the chorus that necks will break. We, The Gods is obviously the catchiest song of this record, and takes advantages of the quiet notes to benefit of the composition’s energy. No rest allowed.
Sunlight/Moonlight focuses on matted melodic riffs and the changeover of the saturated/clean voice to keep its charm and its particularity. Persepolis is a bit like the divine hammer that comes over us. With a warlike introduction, the gloomy ambiance comes fast, increased by Seth‘s voice. A realistic description of the antic city, before some incantations in greek on the second half of the track, right before the final requiem.
You think that it’s enough ? Just wait for SangReal. The receipe is the same : violent riffs and orchestrations. However, this song has a particular aura. Strange and short lyrics, a voice changeover, some whispers… Non, the greeks has more than one trick up their’s sleeve. Narcissus is the final song, but also the one that reminds us the band’s old compositions. It’s also the more peaceful one, that allows our neck to take a break before playing the whole album again and again.
A wonderful come back ? Obviously. During those five years the members were focused on Chaostar and The Devilworx (other projects), but their creative zeal increase. It also evolved. Septicflesh are currently working on their new album, the tenth one. I saw them three times in three years, and their shows are awesome. Cold and distant with the audience, the stage playing hugely supported by the music is really worth of it.