Created in 1992 by Noah Carpenter In New York, Skinless reigns since then on Brutal Death Metal world, leaving four awesome albums until 2011, when the band splits. But two years later, the colossus is back. So formed of Noah Carpenter (guitar), Sherwood Webber (vocals), Joe Keyser (bass) and Bob Beaulac (drums), they integrate Dave Matthews (guitar), who is the only one not to have been present in the bandbefore the split.

2015 definitely signs the return of Skinless with their new bombshell of seven tracks, Only The Ruthless Remains. They worked much more on the production than on the previouses records, and the riffs are legion. Skinless has lost none of its splendor, and here we go. Now. 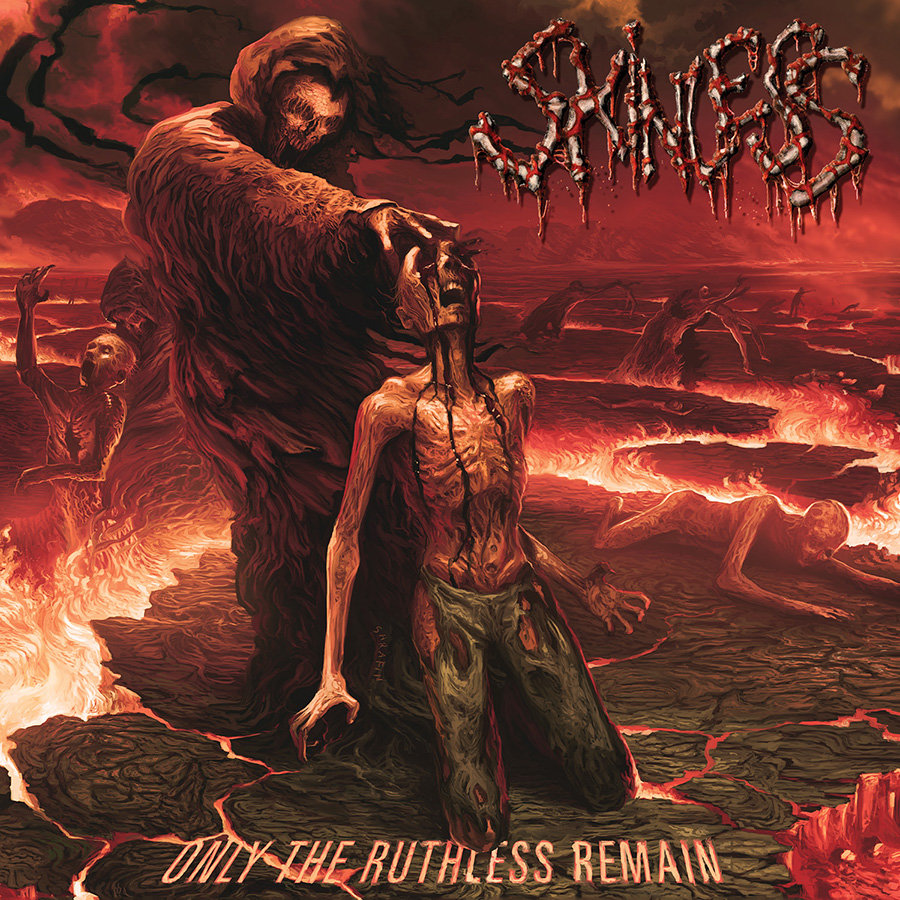 Serpenticide has the honour to open the album, so it is natural that the introduction riff is monumental. A rain of blasts descends upon us after a brief sampler, and Sherwood Webber praises us of his voice, which doesn’t lose its power. A little more calm at times, the riffs are nonetheless heavy, even during the lead guitar parts. The eponymous track, Only The Ruthless Remains, will begin soft before coming back to the blasts and insanely fast and violent riffs. Please note the shrill screams that are hugely powerful… The legends for sure didn’t lost their inspiration during this little break.
Skinless’ introduction will be a brief sampler followed by a rain of blasts, heavy and bloody riffs and screaming until the chorus who is literally a pachydermous one. A clip as violent as gore was shot for this song, as well as for the following: Flamethrower. Real natural outlet, this track also renewed with the screams that accompany Sherwood’s growls. The rhythm part is powerful as Hell, and the lead guitar allows you to take up another step in this ocean of heaviness.
The Beast Smells Blood starts with screams and a riff fast which will escalate into intensity. Sherwood’s voice is more cavernous, while the sharp riffs are here to break necks. Antti Boman (Demilich, Winterwolf) also screams on this track. Funeral Curse, is a sure way of connect worrying melodies and a real steamroller rhythm part. Once the intro is over, the song is very effective, and mighty on stage. At the very end, there’s tribal drums sound and it’s already the band’s final composition : Barbaric Proclivity. This track, is like a way to tell us that there will always be more. Just like a solution to the doubt I had, feeling that something was missing. All the band’s mechanisms are used on this track, which is insane on stage.
Even if they’re not really known by the whole audience, Skinless easily elevate themselves alongside of the greatests Brutal Death Metal bands. After watching their show at Hellfest in 2015, I can’t wait to hear new sounds on CD, and even more to see them again on stage!