There is many ways to discover a band known by name without looking at their work before. I personally think that the best is to see them on stage. That’s how I discovered Welicoruss, a band based in Russia on the beginning, but they’re now in Czech Republic.

In 2002, Alexey “Welicoruss” Boganov (voice/guitar) decided to create the band by his own hands, but in 2005 after a first demo he decided to find musicians. The line-up suffered from many changes, but they release in 2008 the first record, Wintermoon Symphony, and is now stable since 2013. Since then, Dimitriy Zhikharevich (bass), Artiller (drums) and Gojko Mari? (guitar) work with Alexey even if Az Esm, the band’s second full-length, is partly composed and recorded with previous musicians. Even if many musicians participated to the album recording, it’s still a powerful blend of Pagan Metal and Symphonic Black Metal that is known for its violence and mesmerizing ambient parts. Come with me to discover russian folklore! 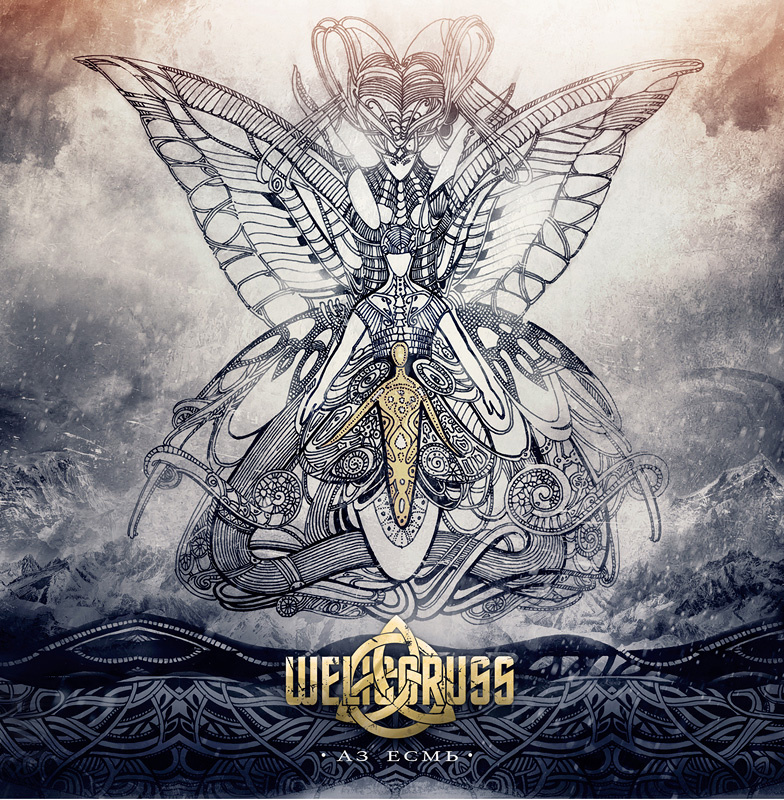 Don’t rely on the cyrillic alphabet used for the songs’ titles, because the introduction’s name is just Intro. A worrying voice that quickly talks to us on on some folkloric instruments until Az Esm begins. The eponymous track will highlight both sides of Welicoruss’ sound, because dark riffs will take over russian traditional vocals. Alexey will start to scream on the track’s second half while the rhythm part slowly leads us to Voice Of The Millenium after the final assault. Introduced by a distant voice, this track is clearly an uncompromising one. Powerfull riffs are reinforced by a warlike double kick and symphonic samplers will sublimate the whole rhythmic.
It’s possible that you feel like you need to escape after Sons Of The North, a track that will focus on the band’s Pagan roots, while Woloshba makes me want to conquer uncharted territories. Those tracks are motivating, but music lovers could see a huge difference between them.

It’s not a problem with Fires Of Our Native Land, because of clean sound’s domination on the first half of the track before leaving for kind of Progressive riffs that slowly fade away on far voices. Bridge Of Hope reconnects with violence and epic samplers that made the band’s fame, for another warlike track. The band’s strong identity allows them to make this song an essential in their discography.
Let’s come back on soft tones with Dolmen, wonderfully introduced by keyboards and a feminine voice that sets place to Alexey’s screams and the whole band’s furious riffs. On Kharna, it’s just necessary to close our eyes to travel on snowy steppes alongside with the band, while Fragments makes you come back to fight an armed to teeth enemy horde. This track is a true saga that blends deep, clean and lyric voices on sometimes technical but still catchy riffs.

Outsider will finally convince the more reluctant ones after a brief introduction narrated by Igor Khokhlovkin who suddenly drops us on an epic solo. After this point, the song is nothing but a tornado of violence mixed to symphonic instruments’ beauty while Alexey shouts increase our happiness until the end of the record. The band cannot abandon us like this, they chose to finish with Az Esm` – Epilogue and its didgeridoos. Resuming the first track’s ambient (my advice is to break the album rule and to listen to the first and the last track successively), this last one makes us drown for the last time in the band’s cold universe and its snowy plains. A last trip with them that ends on a fading choir that dies in the void.

Welicoruss clearly doesn’t make standard songs. On stage, they’re giants with beasts skins that strikes the audience with their riffs one after another, captivating our gaze and ears, while their music is enough to carry our mind out of the pit. A rising band, but that already has its own identity, and they will reveal a surprise soon…