Do you think that playing an Old School sound with unconventional elements is possible ? Humanity Zero is a proof that yes it is.

The greek band is founded in 2003 but we have to wait until 2008 for their first record, even if the next ones weren’t late. Today, it’s Withered In Isolation that Dimon’s Night (drums, guitar, keyboards), Vaggelis Vee Kappa (lead guitar), Stelios (violin) et Giannis Grim (voice) present. A wise mix of Doom Death and Old School Death Metal with ambient and melancholic parts. This tempting blend starts now. 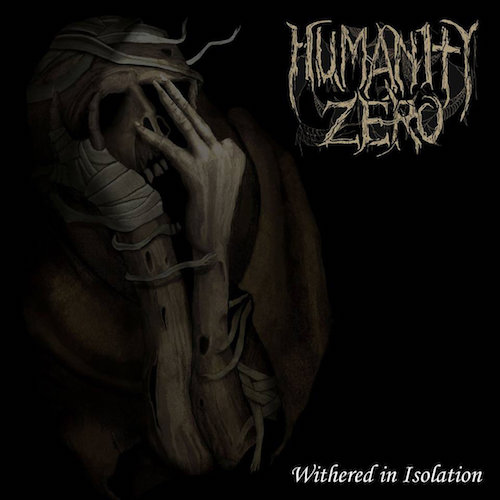 The greeks decided to start with Withered In Scars’ slow riffs. An instant sink into the band’s universe that allows us to discover Giannis’ tortured voice that perfectly fits to this heavy vibe, but they don’t even have a single hesitation to include double kicks parts. We continue with Away From The Light and its disturbing violin. If the band plays an Old School sound, this track has another dimension. The song is really catchy, and we can barely see that it’s near from the end. The band unveils once their ambient side again with Reveries Of My Stained Mind and its keyboards that walks with us for the whole track.
If the band isn’t violent enough for you, my advice is to wait until Fading In A Cryptic Obscurity and its warlike drum that charms you for sure. After the middle of the song, a solo comes to interrupt all this darkness to finally come back to it, while the voice is way more plaintive on Solitary Confinement. The end of the song focuses on a technical part, whereas Horrendous Growls and rhythm part easily leaches into your mind.
The clean voice on the beginning of Blood Redemption can scare, making us once again at a slow track, but don’t worry, tempo will increase quickly while riffs become worrying. The Dungeon highlights the bass sound that roars more than ever, while Vaggelis’ job is to mesmerise us before the final assault. The record’s last track, Premonition, is also the longest one. During more than eight minutes, the band stuns us with a melancholic rhythm sound sublimated by a keyboard that never stops, even during fast parts. We can easily feel the Old School vibe thanks to those simple but effective riffs.

Those three years of rest allow to Humanity Zero to pick out in their internal resources to create some riffs full of sadness. I didn’t know the band before, but I can assure you that My Dying Bride fans will love them as much as Morbid Angel fans.