Some bands can reach harmony between raw violence, ambient sounds that sounds near from esoterism, and a quiet music as hell. One of them is the japanese Post-Hardcore/Screamo legend, Heaven In Her Arms.

There’s just few informations about them since their creation in 2002, but the band that is nowadays structured around Kent (guitar/voice), Takayuki (guitar), Katsuta (guitar), Kentaro (bass) and Rocky (drums) released some demos, many splits with other japanese bands and three full-lengths. The last of them, White Halo, was only release few months ago. Welcome in an unique universe. 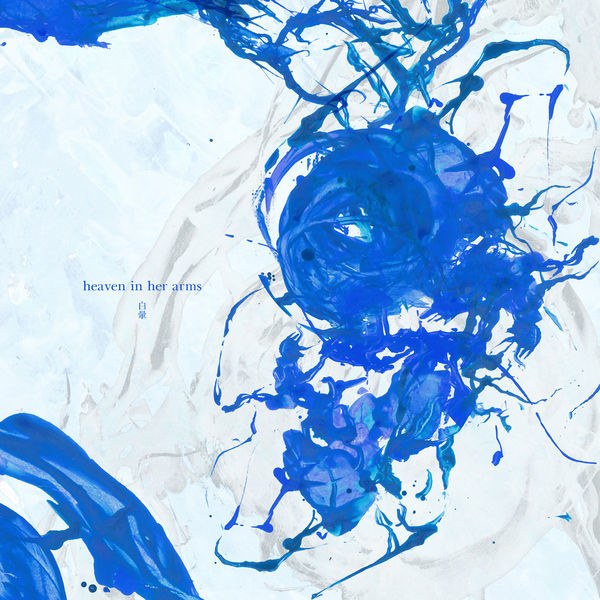 It’s the delicious Ray Of Light At Dusk that will open this record. An introduction with an impactful, crackling, harrowing but especially cristal clear. This track tells everything you should know about the band’s music without unveiling everything. Abyss Of The Moonbow won’t lose a single moment to send us a first burst right into the ears. Riffs are killer but also really atmospheric, and it’s what allows the band to play with ambiences. Literally cut in half, this composition is suddenly awaken by Kent’s melodic voice, that ends on howling in front of our face, which astonishes us.
Another rhythmic takes over with Forgivable Drown and its happy lead guitar, that becomes nearly hypnotic in duets with bass under Kent’s whisky voice. The next track is the one that makes me give in to the first ear. Glare Of The End, and its keyboard introduction, followed by a storm of notes as shrilling as the other ones. The perfect balance between nameless violence, immaculate purity and a touch of sensibility. After some keyboards notes, Chain With Fetters will have the goal to let our mind calm down with mystic tones.

Switching without transition, Entangled Torus reveals a more tortured than ever voice, on carefully chosen and more massive riffs. The final part, even if it’s announced by clean voice, reminds me a powerful Post-Black Metal The record’s last track, Turbid Fog, is also the longest one. If the beginning is really different from the whole album, a white noise makes us come back on the music we know, for an as beautiful as violent music. During those ten minutes, the band rotates between every influences of their universe, but this music condensed stays perfectly structured.

Japanese bands are definitely amazing… Heaven In Her Arms’ huge perk is their musical richness. Members never exclude them from any kind of inspiration, and they allow themselves to create tracks as long as they want to create an impressive result that can even make two different universes match together in a cradle of splendour. Even if they’re just back from a small European run last summer, I hope that a French show will be planned as soon as possible.