In the Metal world, musicians usually end up knowing each of them, and sometimes unexpected projects may see the light. It’s the stuation for Sinsaenum.

If Frédéric Leclercq (guitar and keyboards, Dragonforce) had the idea of this project in the early days of his career, he waited to meet Stéphane Buriez (guitar, Loudblast) and Joey Jordison (drums, Vimic, ex-Slipknot) to built the basis of the Sinsaenum project in 2016, helped by Heimoth (Seth) on bass, and also an impressive vocal duo : Sean Zatorsky (Daath, ex-Chimaira) and Attila Csihar (Mayhem, Sunn O))) ). The six of them worked together to release a first then a second EP and finally a full-length in 2016, made of a dismal and massive Death Metal. Unfortunately, due to the member’s busy schedules, there is no live performance yet, but Ashes, their third EP released at the end of 2017 could announce something… 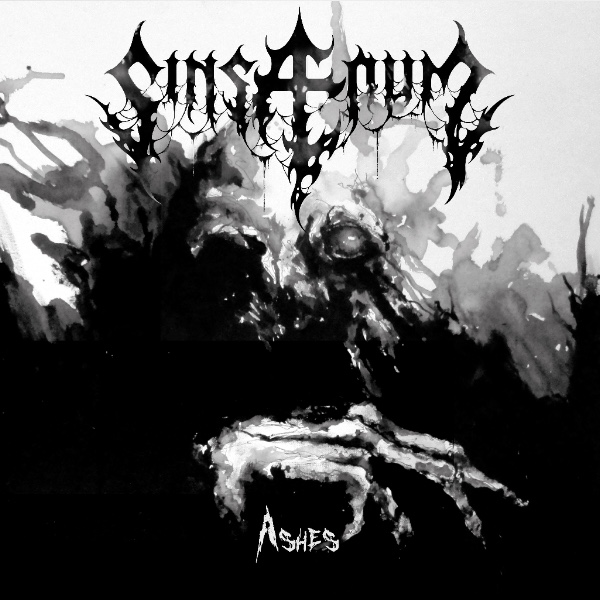 The EP starts with Ashes, the eponymous track and its unhealthy riffs. A massive rhythm supported by keyboards perfectly takes advantages of both voices to create a frightening ambiance. Black and Death Metal roots melt in a monitored chaos that finally initiates a bloody riff by the lead guitar then comes back to the chorus to switch off. Monarch Of Death and its dark rhythm will highlight Attila who yells and screams, musicians array all the technical stuff they’ve got at a rapid tempo, while they keep this melodic side. More focused on ambiances that the band is able to spread, 2099 (Heretics) plays the hand of madness triggered by vocal chaining, while Joey’s double kick wreaks havoc. His furious blasts make us feel like being shook by a storm, whereas harmonics lacerate us shortly after.
The whole team seems being filled by the common will of destruction on Degeneration, and its the guitar duo composed of Frédéric Leclercq and Stéphane Buriez which is improved : their complicity is so deep, and lead parts perfectly slot, provoking some bone breakage on the neck. King Of The Desperate Lands will make Black Metal side come back on the introduction, while Heimoth’s bass maintains an impressive basis for the two guitar fellows. All the melodic side is filled by numerous solos whose track is fulfilled. The last track, available on the japanese version, Dead Souls remix made by Frédéric Duquesne (Mass Hysteria, Bukowski). More massive and effective, this remix’s sound is also colder and more raming than the original track.

It’s a perfect foretaste that Sinsaenum deliver us. An EP tha augurs a dantesque following, first stage performances, but mainly a major player in the Extreme Metal landscape. Its musician’s diversity is a strength that the band never stops to exploit, and universes perfectly fit to each other.