Some bands are known and reputed by everyone, but some smaller bands are still in the shadows. Created in 2016 in Finland, Dark Archive is still part of the second group for now.

Joakim “Lord Mordor” Lindholm (composing, all instruments) and Niko “Perdition” Aromaa (vocals, lyrics) started the journey as a duo, then recruit a full band to record a first EP before refocusing on their duo. The project starts again, and they compose Cultivate Our Blood In Aeon, their new EP. Based on Black Metal, but with various influences, those five tracks are a proof that blends and innovations can fit to every style, even the most codified and strict ones. 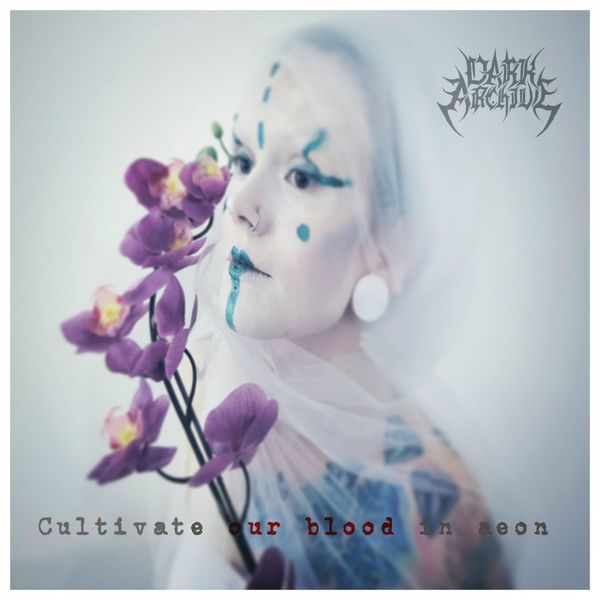 The EP starts on Cultivate Our Blood In Aeon’s cold and clean sounding riffs, the eponymous track. Interrupted on a regular basis by saturation, Black Metal rhythm track suddenly takes control, while Perdition begin to shout. His tortured and acute screams sometimes become a powerful growl, while the rhythmic just leaves a trail of destruction. Relentless blast beat strengthens the violent aspect, although perfectly combines itself with the band’s ambients, that they didn’t forget to include to their music. The final lead guitar part leaves us on a martial rhythm track that fades into darkness. Closure Of Empyrean Delirium’s introductive sampler starts, while Lord Mordor reveals his fast and bloody riffs. As involved as always, Perdition screams again, but his voice has something different. The Black and Death Metal blend still hits us in full force but stops before the end of the song to become a clean sounded outro.
Godfear Eradication’s introductive keyboard, coupled with acoustic guitar, allows to come back on a coherent basis with the previous track, but the storm that follows is from another universe. Riffs are more violent, more shrilling, while Perdition perfectly indulges in a deep and greasy growl that is worth of Brutal Death Metal’s singers, and Lord Mordor continues to develop his art as a true conductor. The sample voice brings a new scream that goes deep into the listener’s soul, before coming back on a more heavy and powerful part. The band’s last riffs angle to a lumbering Slam Death, but Unohda Ei Ikinä returns on an insane and fast Black Metal. Rhythm part and vocal part are both impressing, but it seems that some Pagan/Folk sounds are also part of the bill between two screams, sometimes sharp sometimes deep. The track ends on a larsen to give way to Essence Of Death, the last track. Ways more raw and massive, sounds rushes on us as a real wall. Blast beats, devastating shouts, worrying riffs, all without a single hint of empathy, and that stops as it comes.

Riffs’ honesty in Dark Archive tells a lot about its creators. Devoted and committed guys, they are true composing machines and only ask for a chance to discharge their dark art on the world. As the band becomes a duo again, it unfortunately reduces the chances to see them tear apart a french stage, but I will probably never get bored of the finns’ music.