Their special feature? As its name suggests, their Black Metal is sung in Breton, a language which is more than a simple local dialect. Focusing on the line-up, there was some changes since the early years, but the core is composed of Hiron (vocals) and Vox-T (guitare). To them, they collaborate with Tnemelc (drums), Tan-Gi (bass) and Sven (guitar). After a first demo that awakes curiosity in 2016 then a spit with the iranian band Garhelenth the same year, A-dreñv Ar Vrumenn is released this year. Black Metal fans will easily recognize their roots, but could be surprised by the singer’s voice. Get carry away by their sound that will bring you back in time when druids set foots on the ground. 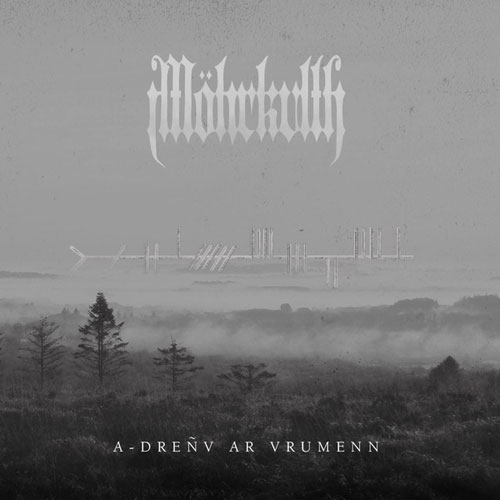 The record begins by Bardo Thodol Part I, a nearly shamanic track with tibetan throat singing as an introduction that directly sets Möhrkvlth’s music basis : an airy and atmospheric sound. The rhythmic that suddenly joins will confirm this idea, with riffs that also have kind of folkloric influences. I already said it, but vocals can be unusual at first, but once your ears are accustomed, it perfectly melts with the Breton’s original blend. Whether rhythmic slows down, it never lose its epic aspect, with an onslaught of blast beats that will only fade away to let place to Goulou Yen Un Heol Skuizh. Hiron’s vocals become more shrilling, and guitar harmonics more insistent, while other instruments bring a heavier sound than on the last track. The break is also stronger and allow the lead guitarist to fully exploit his instrument’s capacity, while distant and oniric screams calls the rhythm back. We continue with Kan An Anaon, a slower composition but to my surprise, it nothing but unhealthy. Contrariwise, riffs are calms and smooth, sometimes flirting with Doom Metal. Bass is also more intense, that feeds this atmospheric aspect, despite blast beats.
Diseol’s acoustic introduction clearly related the band to a folkloric basis that lasts during the whole track, even when saturation comes back. The frontman’s voice is a bit more hoarse, borrowing to the style’s roots, but riffs still doesn’t lose their epic side and when I close my eyes I feel like I relieve a battle alongside the musiciens, each harmonic making me dodge an axe. Some footsteps accompanied by Breton singing that will mark C’hwezn Ar Gwad’s introduction, while they suddenly tends to a both warlike and melodic track at once. Whereas they keep this oniric and cold aspect, the bands knew how to add a violent dimension, that will be approved by screams of terror on the end of the song, before resuming stronger. However this brutal side will be highlighted on A-dreñv Brumenn An Istor, the band’s most impressive track. This side of their music, more direct and bloody, also fits to them, but some atmospheric sounds will quickly join this blend, while the last track, Klozadur, is an instrumental composition that let the listener dream some minutes thanks to a guitar with a both folkloric and ethereal sound.

The time-travel endes. Möhrkvlth achieved to make wander our senses but also and mainly our imaginary thanks to A-dreñv Ar Vrumenn. The band always plays on two dimensions, and whether one overpasses the other, the latter is never this far and we just wait for the moment where it will stands out with a vengeance. Even if this first full-length was highly awaited, I am certain that it is just the first of a series, by the band or by some other groups that will join the Metal Du Breizh movement.