While we mainly know asian Metal for it’s wacky side, Chthonic is a band based on taiwanese folklore, their native country.

Founded by Freddy Lim (vocals/ehru, Metal Clone X) on 1995, he was joined after the release of the first album by Jesse Liu (guitar, Infernal Chaos) and Doris Yeh (bass) in 1999. The line-up solidifies in 2005 when Dani Wang (drums, Party To Party) and CJ Kao (keyboards), and the band reveals their ninth full-length today. Despite their singer’s election at the Taiwanese Parliament in 2016, Chthonic never stop their activities, but only narrowed live appearances. Are you ready for Battlefields Of Asura? 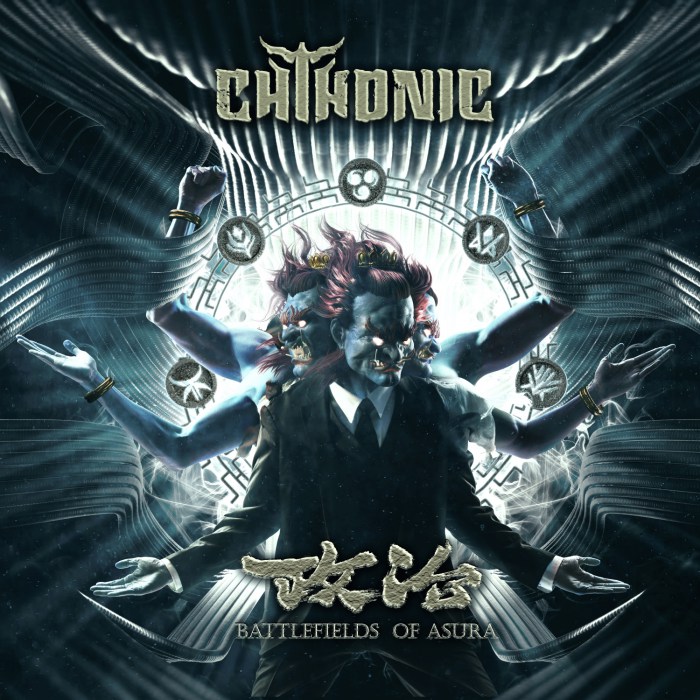 Drawing Omnipotence Nigh begins the album in the band’s warrior world. Even if the sound is mainly airy and restful, there’s still an oppressive feeling, strengthened by tribal drums and orchestral parts, while The Silent One’s Torch starts. Chthonic’s riffs are still as incisive as they were, and Freddy’s voice didn’t lose its strength, whether it is for a sharp or a lower scream. Supported by some airy choirs and ethereal orchestrations, their music takes a whole new dimension. Flames Upon The Weeping Winds follows it, with an as direct as the previous song and a frantic keyboard playing that highlights the composition’s different parts. Ehru gives to A Crimson Sky’s Command its ethnical and mystical aspect that we all love in the band’s music, while a flood of melodic harmonics falls upon us, interspersed with a massive rhythmic.
But the most impressive track is in my opinion Souls Of The Revolution, that begins with scathing riffs which will become heavier after some screams. Tearing harmonics comes over a furious blast beat, while vocals are more and more raging. Taste Of The Black Tears stays on this heavy sound thanks to orchestrations, but musicians gave the best of themselves for each note to fit to this beautiful cycle of violence. Always in this perspective of unfurling wave of power, but embellished by orchestral tones and some choirs, the final blend is perfect. The balance between every aspect of the music is so delightful that it is easy to lost ourselves into their universe just by closing our eyes.
Another instrumental intermission with Masked Faith, a relaxing rest. Intensity progressively increases before reverting with a floating guitar sound that leads us to Carved Into Bloodstone, a track that melts massive riffs with catching and folkloric choirs. While developing a dark but shrilling, choirs parts are heavy as hell, whereas Millennia’s Faith Undone focuses on speed as well as epic and sharp riffs. A female vocalist responds to the singer before a dantean solo that exacerbates this theatrical dimension that I love. The last song, Autopoiesis, is also really different. A grim and frightening sampler that creates a contrast with the band’s universe, but that let us wander amongst the gloom of their world.

Although the band is like a well oiled machine, Chthonic is still an amazing band, able to line rich riffs up that create a special atmosphere. Battlefields Of Asuras must assure continuity in the taiwanese’s work without being repetitive. Is a comeback in Europe possible with the singer’s political career? I really hope so.