2020 signs Abysmal Dawn’s come back, six years after their last production. Entitled Phylogenesis, it follows the band’s massive Death Metal sound. Created in 2003 by Charles Elliott (guitar/vocals, Bereft), he is accompanied since years already by Eliseo Garcia (bass, Imperial Decay), James Coppolino (drums, ex-Insentient, ex-Syrebris) and Vito Petroni (guitar). However, it is the first album the four musicians compose together, helped by a quality guest. And it is released by Season of Mist. 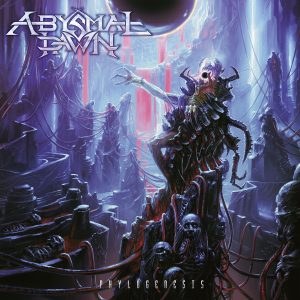 Since Mundane Existence, the first track, the band hits strongly. A ferocious rhythmic, a furious blast and violent riffs come over us without a warning. Technicity hints melt to raw brutality, with some Old School touches. Let’s stay in this imposant rhythmic with a high tempo for The Path of Totalitarian, a composition that uses again the musician’s technical abilities. Some parts just break the rhythm before resuming again, and lead guitar offers us some slashing parts between two piercing screams. Hedonistic is heavier, more jerky and highlights bass sound in the mix, that profits to those striking harmonics, while A Speck in the Fabric of Eternity focuses on the massive rhythmic the band arrays. Hitting harmonics are also here, and the band literally run over us with this imposant sound. There are groovy sonorities in this track , while Coerced Evolution favours jerking and catchy riffs. Those jolting rhythmic allow the band to give it an energy outburst, and even a guitar solo.
Martial Death Metal rages anew on True To The Blind, a track with numerous accelerations that support cavernous howlings and devastating blast beat. Lead parts are strangely melodic while Soul-Sick Nation is a incredibly heavy song. The americans trample on us under their riffs with the help of Fredrik Folkare (lead guitar, Unleashed, Firespawn, Dead Kosmonaut). The next composition, The Lament Configuration, is the last one, but also the longest one. Some dissonant riffs, a touch of technicity and heaviness again, including also screaming choirs that join the singer’s ranting. A true piece of happiness for every Death Metal lover, just like Flattening of Emotions, the bonus track that is nothing more than a Death cover. We find this Old School rage back and this technicity with Abysmal Dawn’s touch for a dust removal moment of this perfect track, that the band sublimates again.

Abysmal Dawn machine is back now. Phylogenesis pushes simultaneously violence but also the band’s riff abundance to the next level, and this blend is really pleasant to hear. Of course we also hope for a come back in France as soon as possible!