Created in Egypt in 1999 by Ismaeel Attallah (guitar/vocals), the band releases its first album in 2014. Completed by Youssef Saleh (guitar/vocals), Julian Dietrich (drums, Cloudbreaker, Into Coffin) and Stefan Dietz (bass, Horresque, Nocte Obducta), the band releases Carving the Fires of Akhet, its third album, in 2021. Notice that bass was recorded by André Meyrink (Chaos Invocation, Porta Nigra), who left few months after. 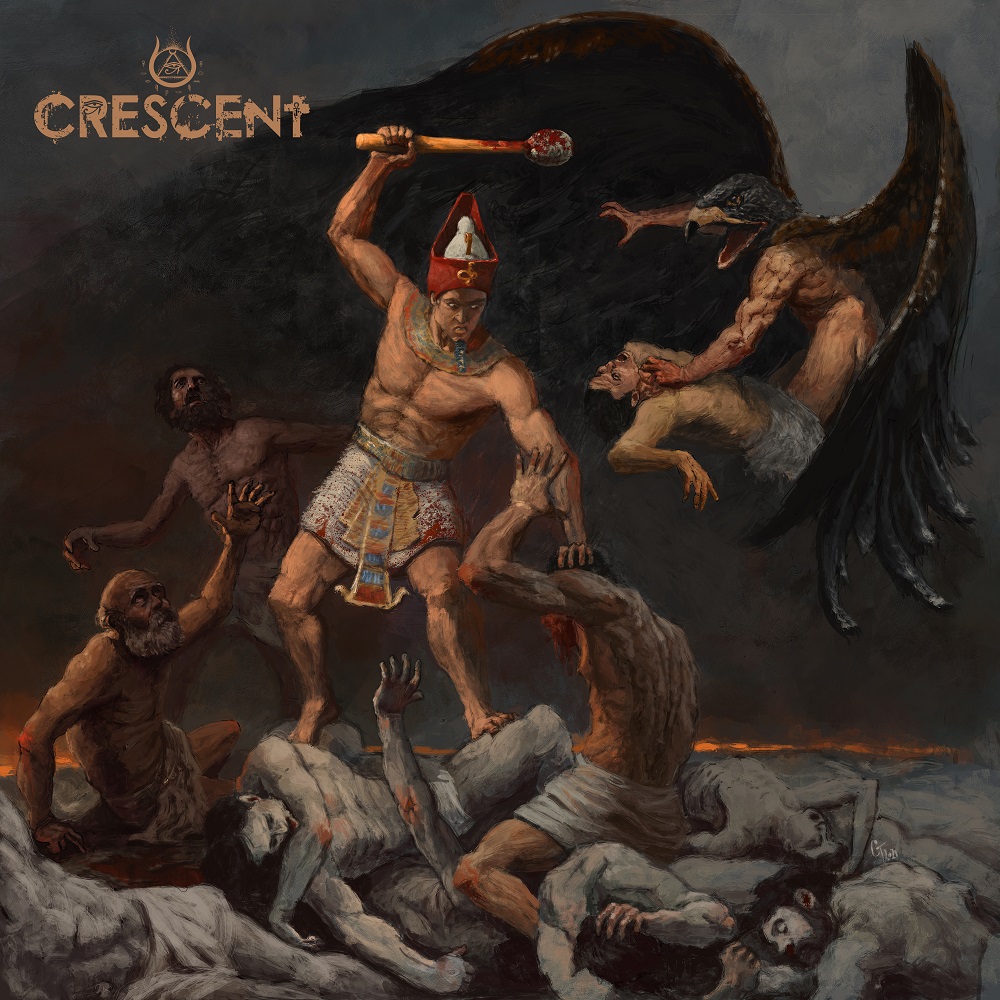 The artwork made by Khaos Dictator (Asagraum, Devourment, Nordjevel, Saor, Terrörhammer…) lets no doubt: the band continues to explore egyptian mythology with its majestic Black Metal.
The Fires of Akhet, the first song, instantly proves it: oriental influences are fully part of riffs, just like references into the lyrics. The band’s sound intrigues and catches us into its dark tones, then Moot Set Waas continues to mesmerize us thanks to heady leads that are placed as on energetic parts as on more ambient moments. Serpent of Avaris offers a haunting and weighing sound punctuated by morbid howlings, offering a seizing contrast, then the vivid Neb-Pehti-Ra picks into Old School Death Metal to accentuate its aggressiveness. Riffs become groovy while keeping this dark and mysterious shade, while Imprecations upon Thy Flame offers a mystical ambience, dyed with unhealthy parts. The solid rhythmic shows aggressiveness spurts, then Drowned in Theban Blood melts once again majestic parts with heady melodies, rooted into violence and heaviness. A hellish solo takes control of the song, melting infernal melodies and mystical ambience, then the sound calms down with Crimson Descension, an occult interlude. Some percussions, a haunting atmosphere, then As Nu Enshrines Death comes, offering oppressive, dark but fascinating sonorities. The song is just outstanding, offering all the band’s influences into an impressive melting, dyed with those egyptian Folk influences.
Longtime fans will love the first of the three bonus songs. Entitled Dreamland, it is a reinterpreted version that features on the band’s first composition, called Edgar Allan Poe’s Dreamland. Whether the demo was first recorded with a quite poor sound, this new version honors it, highlighting violence, heaviness and dissonance. The band chose to cover Dissection and Bolt Thrower next, two band with distant universes. Played to the exact note, both songs however fit to the band’s ambience. Whether Seper-I-Set places heady and dark melodies, …For Victory adds this heavy and hooking rhythmic to a great place.

Crescent reigns over its kingdom, but also conquers its neighbours’ one. Whether the band’s style is already rich and wide, the band picks into close universes to create additional tones, making Carving the Fires of Akhmet is an album not to miss.