After giving us wet dreams, Distant unveils Aeons of Oblivion, its second album. 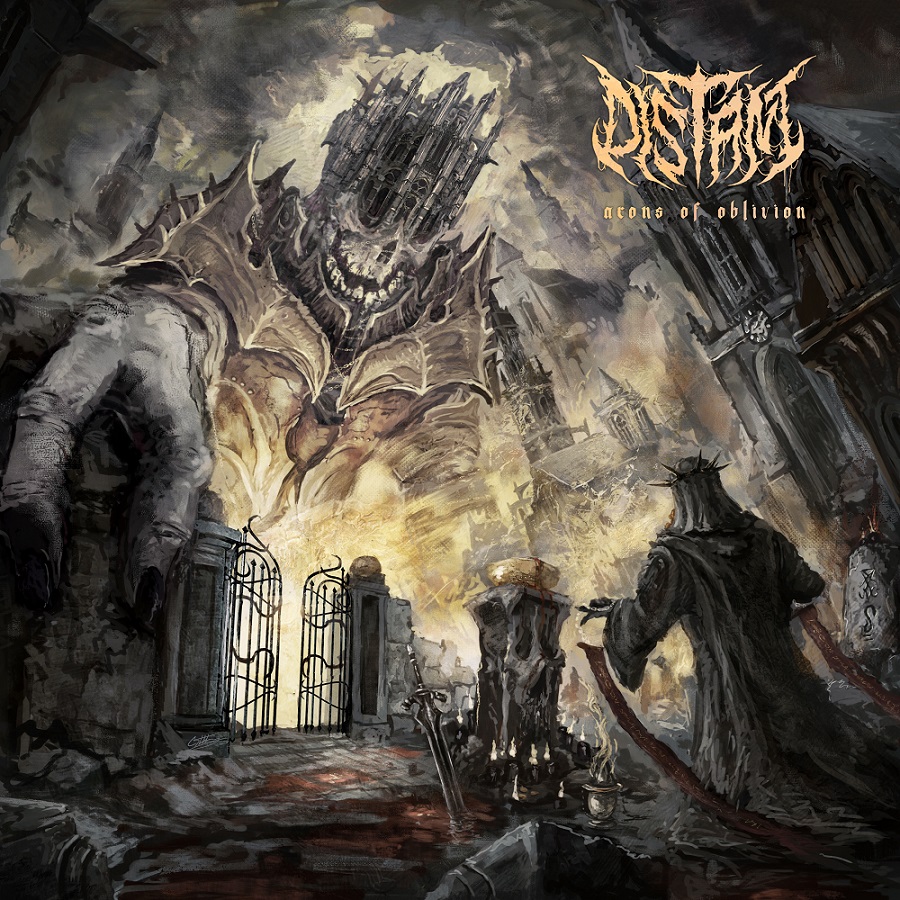 Even if the band already unveiled some songs with Dawn of Corruption and Dusk of Anguish, their two previous EPs, we have nineteen songs for more than an hour of violence. Some guests come to add rage, technicality or blackness to the album, like Mendel bij de Leij (ex-Aborted), Adam Warren (Oceano), Jason Evans (Ingested), Lochie Keogh (Alpha Wolf), John Robert C (The Last Ten Seconds of Life) or Kyle Anderson (Brand of Sacrifice), and they all perfectly fit to the band’s cruel fantastic universe.
From Pandemonium, a frightening introduction, we feel the sound will be unhealthy and super powerful, then songs come to confirm it. Low-tuned instruments, crushing breaks and killer riffs that let an important place to incredibly aggressive vocals, from cavernous growl to pig squeal. But the band also chose to include oppressive, dark and sometimes terrific samples to its compositions, like on Hellmouth, Graveborn or Oedipism, a quite technical and dissonant song. Come shorter transitions allow us to breathe, like The Offering or The Void, but violence is never this far to honor heaviness and rage. Where the band surprises us is with the four Ritual songs. Whether Ritual I Cyklus is a soaring and harrowing introduction, Ritual II Ravka opens us the gates of blackness and a fast-paced blast before Ritual III Vermilion Rivers drops hooking and heavy moshparts. Ritual IV Hull Of Crows destroys us off with the raw strength the band perfectly deals with, before coming to the end of the album. The Tyrant’s Covenant quickly assaults us before offering a mystical break that will finally reconnects with violence, then Maledictus develops a climax of blackness and heaviness before Argent Debt, the bonus song. The song is unusually long, but it will offer both pure heaviness and riffs supported by massive howlings to close the album.

Distant did an interesting teasing with its two EPs. But Aeons of Oblivion does more than only using known songs, it integrates them to a fantastic adventure, dubbed by an incredible and crushing violence, that sounds promising for live shows.