Vrykolakas is ready to fight.

Created in 1991 in Singapore, the band releases a demo, then goes to sleep in 1993 until 1999. In 2021, Andi (vocals, Chaos Regal), Khairil (guitar, Soul Devour) and Edi (drums) release And Vrykolakas Brings Chaos & Destruction, their third album. 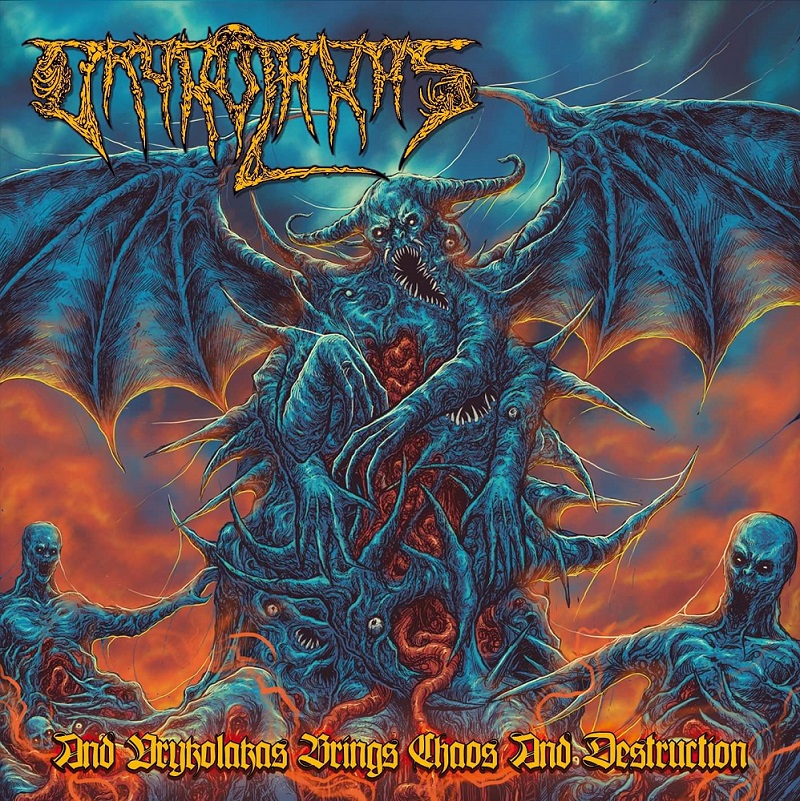 Whether the band played at the beginning some Death Metal with Black influences, those roots progressively turned into a very Old School Brutal Death. We can feel it in both the greasy mix and the songs’ patterns, beginning with Silkhannas Falls From Grace, a catchy and violent track. Harmonics are quite incisive, while those heavy howlings stay into an aggressive ambience, which continues with Kaf-Fa-Ra, the next song. Fastness, massive sound and a thick rhythmic are here to create riffs that smell the nineties and blood, then Yajuj Majuj Versus The World comes and brings a raw energy fix combined to this brutal Old School sound. Once again, complex leads are not aside, just like on the fast The Dajjal Brings Chaos, a heady song that will create a tornado of violence before slowly calming down. But the quietness won’t last, because rage will surface again, like on The Storms And The Shadows, a composition that links again catchy riffs, heaviness and some well built riffs. The song is solid, but it will let place to The Jasad On The Throne and its natural heavy groove. The song is still energetic and solid, then musicians add epic tones to Transcending The Quantum Realm Of Barzakh. Some accelerations, hints of technicality, but this oppression and this violence still live, supported by screaming backing vocals. We end on Seven Steps Above Six Feet Under and its explosive accelerations. Even if the composition offers a very aggressive basis, the final part shows some oriental mystical influences thanks to vocals far from howlings.

With And Vrykolakas Brings Chaos & Destruction, Vrykolakas offers several things. An Old School Death Metal with raw Brutal Death influences, but also some catchy accents, effective riffs and some parts picked from other styles. To be followed!