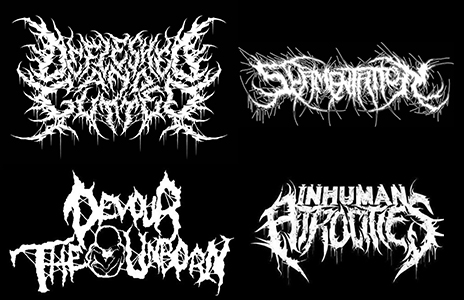 It is time for violence with Excruciating Malformations Of Abhorrent Descent!

What is it? A split placed under the name of Brutal/Slam Death that unites Americans Defleshed and Gutted and Inhuman Atrocities, but also Devour the Unborn and Slamentation, two bands with an international lineup. 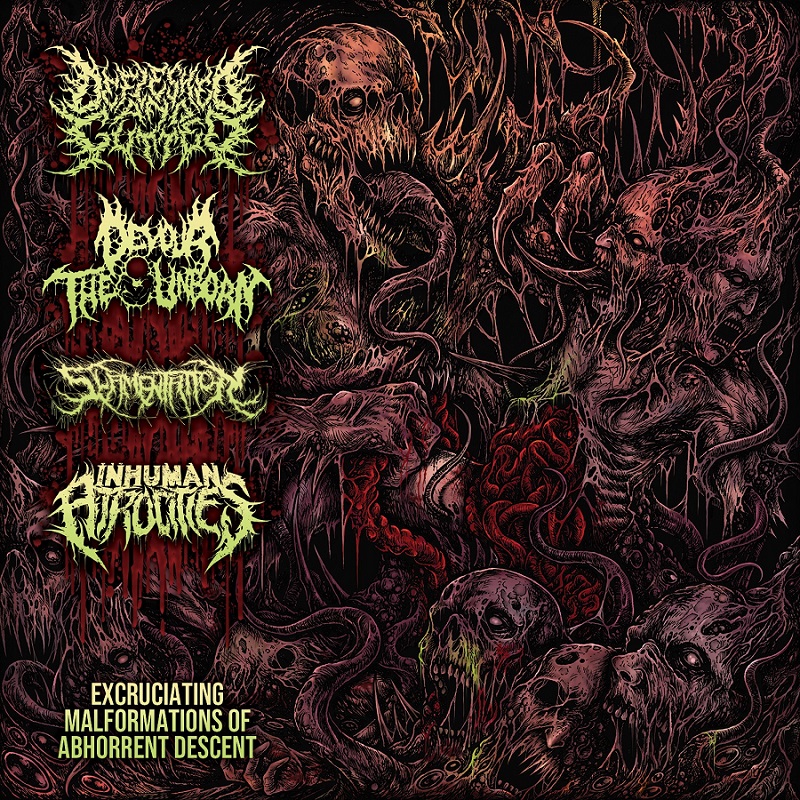 We begin with Defleshed and Gutted, a band that re-recorded and re-mixed four songs from their first album. Heaviness, fastness, modern sonorities and genuinely effective drums meet to create a sound shockwave on which it is very hard not to nod. Songs are chaining without dead times, alternating moshparts, atomic riffs and howlings in the purest tradition of brutality. If you feel the tempo is slowing down, just expect the storm. My favorite track? The apocalyptic 2 Dead 1 Missing.

Devour the Unborn comes next with a more Old School and greasy Slam Death. Tracks are very groovy, and they can count on this cavernous growl as well as mammoth breaks and riffs that are not looking for fastness nor technicality, only effectiveness, that doesn’t prevent them from adding some brutal spurts. Each note sounds like a punch, and each harmonic pulls our skin a bit more before crushing us again. Just do not miss the dark Totempole of Dismembered Bodies!

It’s time for Slamentation to drive the machine with their very Old School mixing that sometimes uses Grindcore elements. Riffs are still as greasy as always, and this hooking morbid groove sinks us to the ground thanks to massive blast while the vocalist vomits upon our face. Once again, pure effectiveness is preferred to technicality, taking advantage of fastness spurts to assault us, or in opposite of a worrying sample to allow us to breathe to better crush us. The song that will tear your living room apart? Horrific Experiments of Putrefaction for sure.

The last band to strike, Inhuman Atrocities and its energetic Slamming Deathcore. The band is slightly different from the others with some Hardcore influences, but they for sure know how to smash us with thick riffs and tearing harmonics, super fast drums and monstrous howlings. The four songs are undoubtedly shaped for the stage, and they will make the crowd move a lot when the band will play, rhythmed by the vocalist’s howlings, alternating between demonic scream and cavernous growl. The one on which you could break bones? Dead on the Slab.

After more than an hour of uninterrupted violence I can ensure you Excruciating Malformations Of Abhorrent Descent is the brutal split you need! With their different but complementary styles, Defleshed and Gutted, Devour the Unborn, Slamentation and Inhuman Atrocities explore Slam, from the most Old School to the modern style!