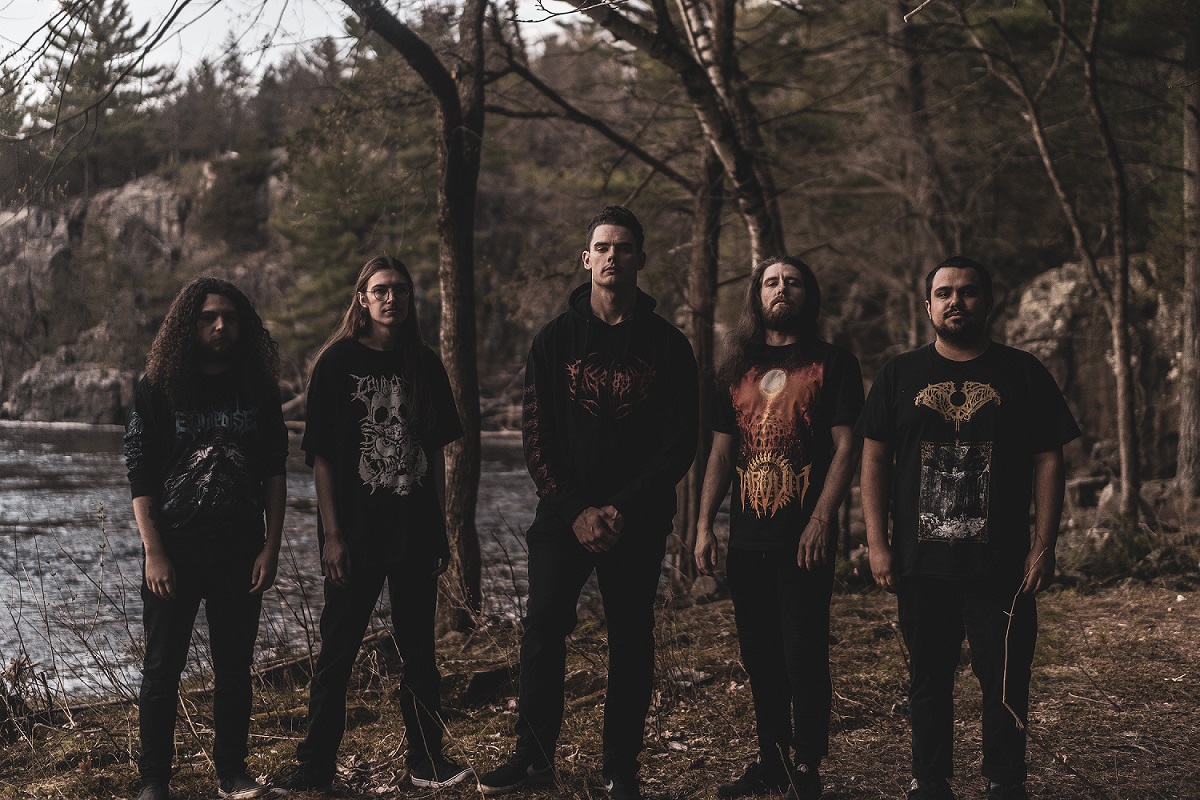 Hello and first of all thank you for your time! How would you introduce the band Fleshbore without using the label “Death Metal”?
Michael M: Thank you! Typically I explain Death Metal to people as “extreme Heavy Metal but with grouchy vocals”, but you could also imagine the band as a military squad unit with people with a particular set of skills.

What does the name mean, and what is its link with the music you play?
Cole C.: It was something I just came up with, no real meaning behind it.

Embers Gathering, the band’s first album, is about to be released. How do you feel about it? Do you already have some feedback?
Whole band: We are absolutely stoked to finally have an album out that captured our vision. All feedback so far has been stellar.

How does the composition process happen? Was it different from the EP process?
Michael M: Before Tyler and Michael O joined it was just Cole Chavez and I writing them out.
Tyler: We do a lot of in room together compositions and the guitarists will go home and do some deep thinking.

What can you tell me about the artwork? What about its connexion with the music and lyrics?
Tyler: The artwork is a nice resemblance in reference to the “longing” or “quest” that’s taken from the title track’s lyrics.

You chose the eponymous song, Embers Gathering, to have a video clip. Why did you pick this one?
Whole band: We felt it was the best representation of the whole album and a real catchy tune. 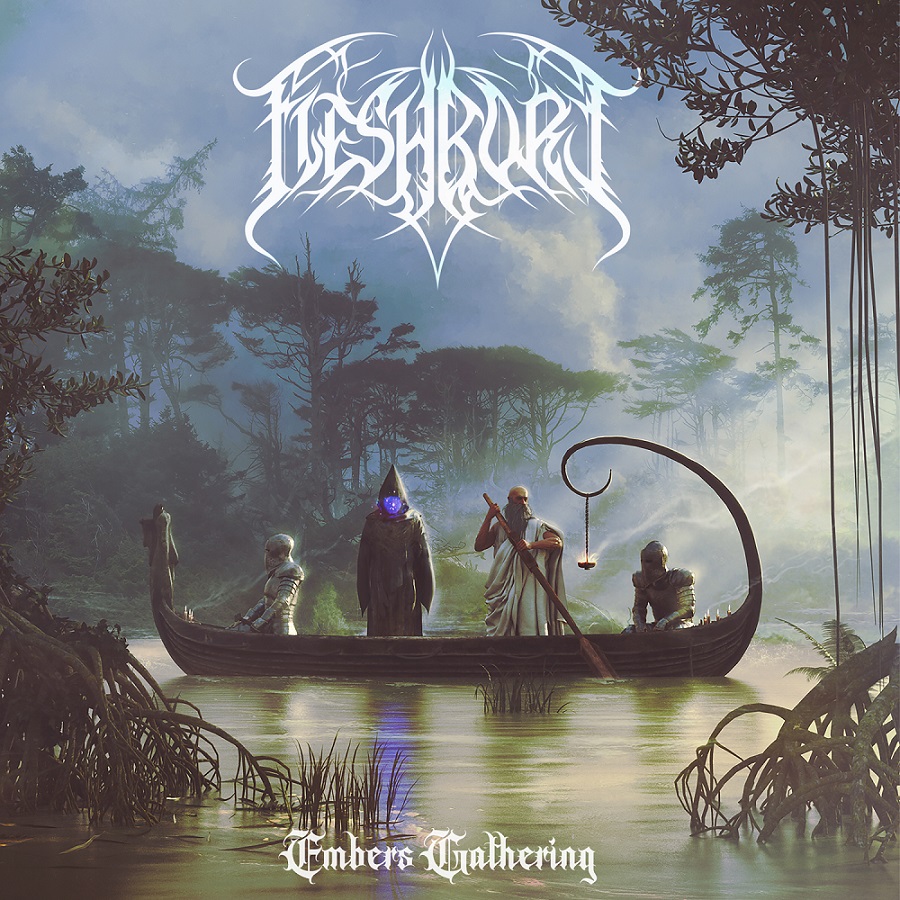 There were some line-up changes since the band’s creation, how do you deal with it as a band?
Cole C: We peacefully parted ways with the old members and needed two people who wanted to continue to exceed musically.

Since last year, Covid pandemic is fucking a lot of things up, how did the band deals with the situation? Did the pandemic have any impact on the album?
Whole band: The album was delayed unfortunately and shows like everyone on hold. We signed to Innerstrength over this period and just pretty much had to wait on everything. We were able to individually practice and keep writing new music so it was kind of bittersweet.

I know that the worldwide situation is still uncertain, but maybe you have plans for the album release, or even later?
Michael M: We have quite a few shows booked for this fall and are still booking more for the rest of this year and next year.

The band was created in 2017, and even if two of you also played in Into the Divine, it’s really young for a band. How did you manage to create your identity between Technical Death Metal and a lot of melodies?
Cole C: We took everything that we liked musically and did our best to create a cohesive sound. Every member has their personal tastes and Fleshbore has been a good way for us to express ourselves creatively.

What inspires you to create music and lyrics? It can be musical influences or anything else!
Tyler: Most of my lyrics come from life situations. Music in general inspires me to play and create, that and being in a room full of friends doesn’t hurt.
Michael M: My musical inspirations typically come from a combination of experiences from my life and video games and how they make me feel.
Cole D: I like to add a little bit of everything I like into what I write and play. I always analyze my parts and how they fit within the context of a song, and I like to experiment with different ideas.
Cole C: I’ve always wanted to create riffs that felt evocative. Anytime I write a song I want the listener to be pulled into the story I’m trying to tell.
Michael O: Most of my lyrical content has spawned from life experience. Other than that I like to expose myself to/research foreign concepts to put my mind in a fresh and unknown place while writing.

Do you remember the first time you played an instrument? When and how was it?
Cole D: I was still in elementary school when I first started playing an instrument, and I had a really rough time at first. But music has been something that’s stuck around with me all my life, so I eventually got better with playing an instrument.
Cole C: I remember trying my hardest to learn Enter Sandman by Metallica. It was really terrible and I showed my first grade class for a talent show. Despite this it was still a huge amount of fun and inspired me to keep going.
Michael O: I am a child of Rock Band, which is when I first got into drumming. I bought an electronic drumset with money from my first job and then eventually prioritized vocals when we had no one to make monster noises in my first band.
Michael M: My dad bought me my first electric guitar around the same week I got Guitar Hero 2 on the Xbox 360. The rest is history from there.

What do you love about your music that you cannot find in other band’s music?
Tyler: I think we all listen to different types of music in the band and it really shows. We all like Metal and all but listen to a variety of music as well. I also think we give a perfect blend of intense and melodic.

Maybe you already heard about the french Metal scene? Which french bands do you know?
Tyler: Gojira of course. Svart Crown has been one of my favorites for awhile.

What if I ask you to compare Fleshbore‘s music with a dish? Which one and why?
Michael M: Imagine a perfectly cooked burger with your favorite toppings and alcoholic beverage. 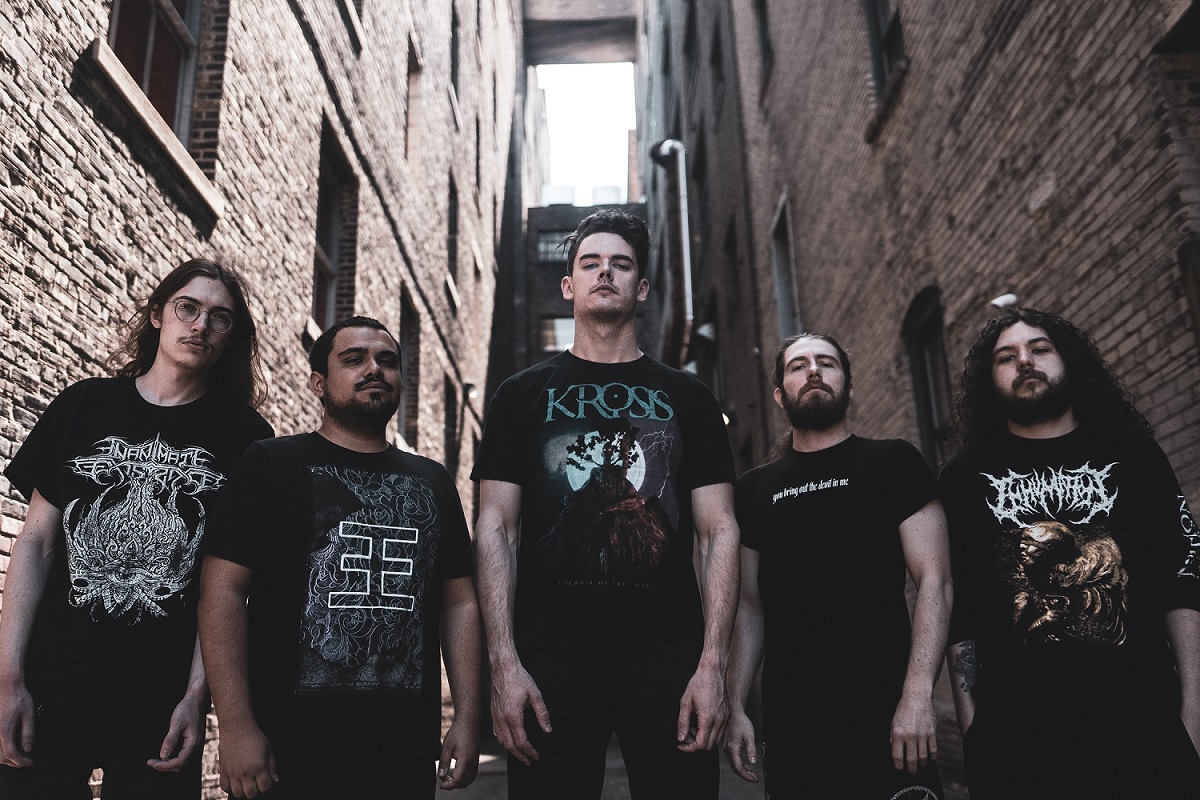 Are there any musicians or bands you would like to collaborate with?
Tyler: Very open to all. If I could choose, it would either be Matt Sotelo of Decrepit Birth.
Cole D: I would love to work with some of the American Tech Death bands such as Arkaik, Inferi, Rivers of Nihil, Decrepit Birth.
Michael O: I would love to work with Julien from Benighted on a track, Sven from Aborted or Grimo from Cytotoxin.
Michael M: Asides from my favorite bands I wanna work with all of my music homies one way or another.

Last question: which bands would you love to tour with? I let you create a tour with Fleshbore as opener and three other bands!
Tyler: Virvum, Enfold Darkness, Decrepit Birth.
Cole D: Cytotoxin, Defeated Sanity, and Archspire.
Michael M: Archspire, Aborted, and Cytotoxin.

That was the last question for me, so thank you very much for your time and your music, last words are yours!
Whole band: Thank you for your time and listen to Embers Gathering! I hope you feel something out of it.