After a beginning as Black Metal solo project by Fantomslaughter (vocals/guitar/bass) and two demos, the band recruits Equimanthorn (keyboards) in 2016. A first album is released, then the band goes to Doom/Death for the second one. In 2021, Nihilistic Manifesto (guitar) joins the band and they compose Foreverglade. Drums are recorded by L.Dusk. 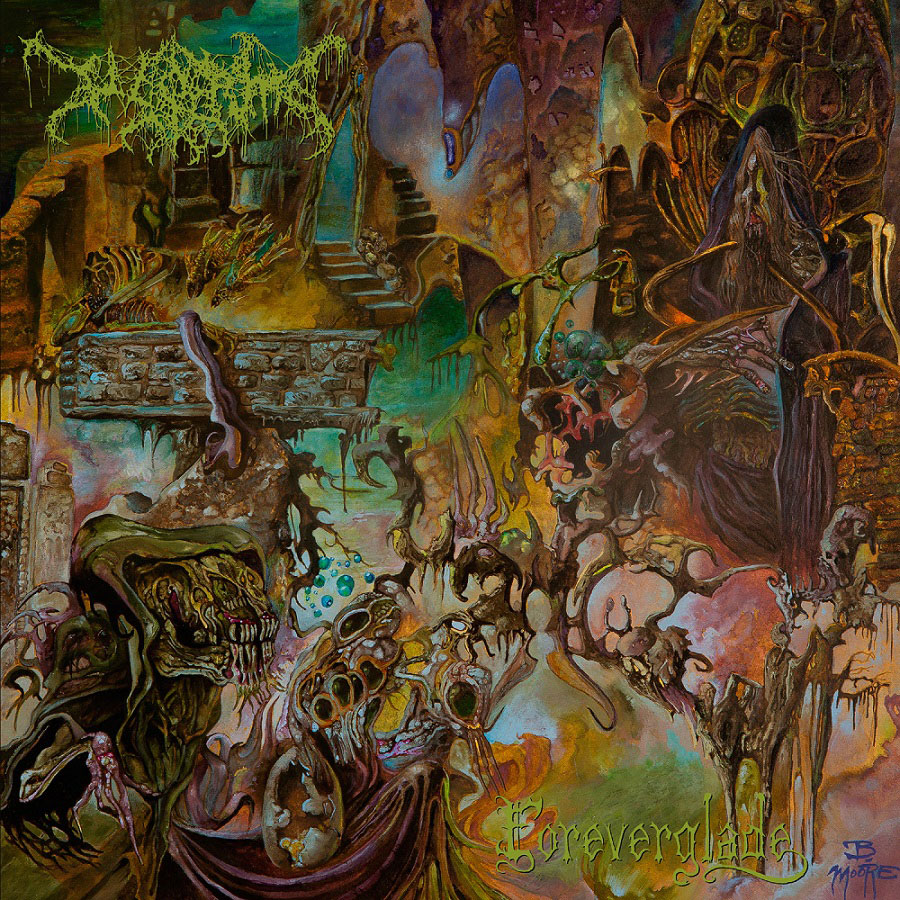 The album begins on worrying sonorities from the Foreverglade introduction, the eponymous composition. Clean sound let place to an oppressive heaviness, topped by thick vocals, then riffs become more energetic while staying greasy and massive, before welcoming a dissonant melody which drives us to the end of the song and to Murk Above The Dark Moor. A stunning blackness joins the heavy and haunting sound full of gruesome howlings, then the rhythmic accelerates to strike us with its raw violence. After slowing down again and unveiling a ghostly solo, the long Cloaked In Nightwinds begins while making us drown into the abyss. The echo on vocals gives those massive howlings an occult aspect, haunting heavy and simple but effective riffs, while keyboards bring a majestic tone to the song, just like heady leads. The song will end after terrifying screams get lost into a slow obscurity then Empire Of The Necromancers mesmerize us with airy leads. The song will become more energetic, flirting with epic tones while being still dark and weighing, then the song slows down again before offering a suffocating basis to a hectic solo, driving us to the soft final part before the short Subaqueous Funeral. Whether the song begins with a soft sound, saturation will come back to set fire to this weighing rhythmic, welcoming epic leads and only few whispers, then the end of the album comes with Centuries of Ooze. Even if the first part of the song is really slow, we notice the rhythmic accelerates to be very raw before it slows down again and unveils heady leads, then clean sounds surface again before this bright and energetic solo, which will eventually leave for a last haunting part.

Worm’s permanent oppression is fed by mysterious and weighing sonorities. Whether Foreverglade stays on a known basis, the band’s riffs integrate majestic, disturbing elements, or even powerful accelerations.