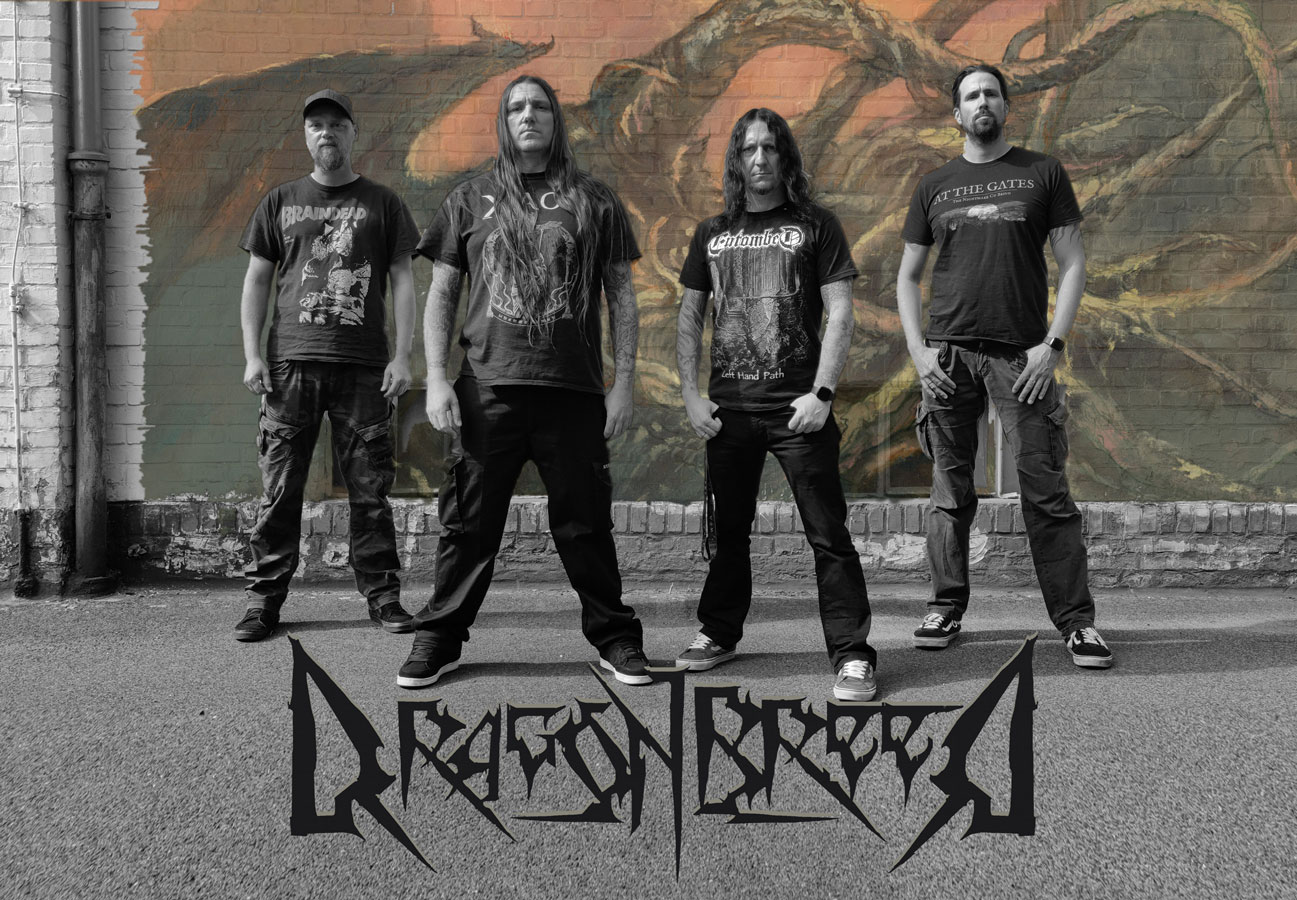 Hello and first of all, thank you very much for your time! Could you please introduce yourself and the band Dragonbreed without using the usual “Metal” labels?
Sebastian Jensen (guitar): Bonjour à tous, this is Sebastian from the band Dragonbreed playing the guitar and doing some backing vocals as well. Dragonbreed sees itself as a gathering of friends with a musical background who have founded a band to share their passion and are mainly oriented towards the Scandinavian hard music scene of the 90s. The usual suspects of a band such as electric guitars, bass and drums play just as important a role as the aggressive vocals in a melodic context.

How did the band meet?
Sebastian: The idea came about after finishing the writing process for SuidAkrA’s Wolfbite album. During this process we had a couple of parts, ideas and even songs that would not quite fit the concept, feeling or direction we were looking for at that time and so we shifted them to a later time. We quickly realized that this time various Old School Melodic Death Metal parts made their way into this collection. Because, among other things, Sebastian in particular comes from this direction. Quite quickly we came up with the idea of perhaps making something new and different out of it – a new project that deals with this genre of music, requires a different approach and presents it as a challenge.

Where does the band’s name come from, and what is its link with your music?
Sebastian: This goes back to an old song by SuidAkrA called Dragonbreed, which was recorded already a few years ago. Kris Vervimp and Arkadius talked to each other about the still nameless project and the current status and as well about SuidAkrA. They somehow quickly came across this and in the end we chose that name.

The band welcomes its first album named Necrohedron, how do you guys feel about it?
Sebastian: Absolutely thrilling and excited of course! We are proud of the final outcome of Necrohedron and of course hope that the other listeners feel the same way. We definitely feel as if the whole thing is really just the beginning.

What is the story behind Necrohedron? What are your influences for this album? Musical or not.
Sebastian: The artwork, as well as the lyrics on our first release, are beautifully done by our friend Kris Verwimp. Kris was inspired by an old Roman object called the “Dodecahedron”. There are many theories about it but for the concept of Dragonbreed he renamed it a Necrohedron (hedron stands for plains or dimensions) because it is an object that is used to open portals to summon demons and other dark creations from one of the undead dimensions. The lyrics all tell different stories framing the Necrohedron based on the idea of the different Hellraiser movies – different movies that all revolve around a central object.

How does the composition process happen? Was it different from your previous releases?
Sebastian: Since it is the first Dragonbreed album there is of course no direct comparison within this project. Nevertheless, we have all in the band already worked on various other publications. The general approach is always quite the same and we can rely on the past 15 years of experience. Everything connected is thus much more effective. Different though, in this particular case is, that we were able to fall back on almost finished ideas and songs and polish them up and continue working from there. Another difference is that this time we are not working around a finished concept but each song could stand on its own with a common central object.

What can you tell me about the album cover and its relationship with the music?
Sebastian: The Artwork, as mentioned before, is done by Kris and we really love it. He’s just such a talented artist and he’s shown and proven that to us so many times. The cover shows the Necrohedron object in the middle around which everything revolves and various creatures and demons can be summoned that you can see here as well.

The band’s sound is made of pure energy from Melodic Death Metal influences, but also some coldness. How do you guys melt all your influences together?
Sebastian: The obvious intention of this project was to put this Melodic Death Metal influence in the foreground and to pay homage to it. This is possible, among other things, by all members incorporating their experience and influence from that time and then implementing it.

How do you decide to use harsh or clean vocals?
Sebastian: Fortunately, the many years of experience we have gained also help us in this point. It’s a combination of several things that make us decide that. Either the lyrics and their content already give a definitive direction or the music demands, for example, in certain parts a different vocal approach and direction. This lets us decide how to proceed when finally placing the lyrics.

Since 2020, Covid-19 crisis fucked a lot of things up, how did you face the situation as a band? Did it have an impact on the album?
Sebastian: We definitely used the time to concentrate more on creating and writing music for all the different projects we are working on. So we all were able to deal with the situation quite well I would say.

Do you already have plans for the future after the release of the album?
Sebastian: We would very much like to bring the whole thing to the stage, if it is possible again and the general framework conditions fit. We’ll see when that will be… We all love to be on stage and of course we want to present the new album live as soon as possible. And besides, we would definitely like to produce and release a Necrohedron follow-up album in the future.

What can you tell me about the evolution of the Metal scene around you?
Sebastian: The scene has and always will continue to evolve in the future which I think is a good thing. This development therefore does not mean a standstill and keeps the entire scene interesting and what will develop further from it in terms of different styles, for example.

Do you think you still improve yourselves as musicians?
Sebastian: Absolutely, every day I would say. Learning in this regard never stops and you are always evolving. Be it that you listen to other, maybe different music and deal with it or play an instrument and practice or record and produce different music in the home studio. An open mind is the key of the whole I would say. 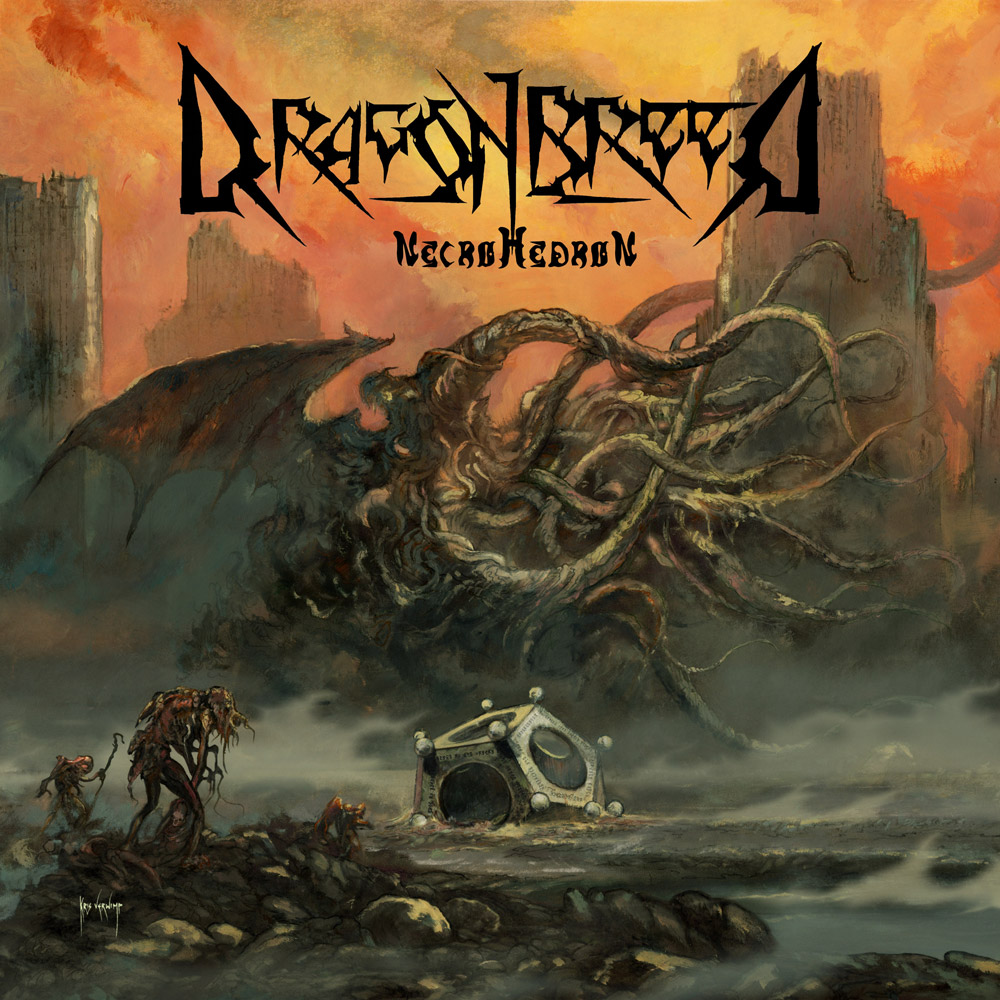 What are your best and your worst experiences as a musician ever?
Sebastian: Being around for so many years in the music business there are just too many to be mentioned. To be in a band is sometimes like a rollercoaster ride. But I cannot say that there is that one specific good or bad experience.

What led you to the Metal universe back in time? What was the very first album you ever bought?
Sebastian: A long time ago, my best friend started listening to loud and heavy music over his walkman. He also bought a guitar at that time. Since we spent a lot of time together, I quickly enjoyed this simply captivating music and power it holds. Without further ado, I also bought a guitar and we started jamming together. My first CD, which I bought at that time or which I at least can remember, was In Flames – The Jester Race.

What do you know about the French Metal scene? Which French bands do you know and like?
Sebastian: I absolutely love the French metal scene, the people as well as playing in France! When you are talking about Metal bands with a big impact coming from France there comes Gojira or Alcest in mind right away for example.

What if I ask you to compare Dragonbreed’s music with a dish? Which one and why?
Sebastian: Puh, hard to say… probably a dish that comes in honest, direct with different ingredients and heavy to digest I would say 🙂

Are there any musicians or bands you would like to collaborate with?
Sebastian: Since we have often worked very positively and successfully with various musicians, friends and bands in the different projects in the past, I can still imagine that. This definitely broadens the horizon, makes the whole thing something very special and gets even more out of it while, above all, it is a lot of fun. Let’s see what will happen in the future.

Last question: which bands would you love to tour with? I let you create a tour with Dragonbreed as opener and three other bands!
Sebastian: What about Dragonbreed, Graveworm, Fall Of Carthage and SuidAkrA 🙂 ? It would be really funny to see that in principle only the backdrop changes and we change the instruments on stage or go down for someone else. On the other hand, we would all need several days of vacation afterwards.