Kreator, the German Thrash legend, is back with its fifteenth album.

Created in 1982 under the name Metal Militia, then Tyrant, Tormentor, and finally Kreator in 1984, the band led by Mille Petrozza (vocals/guitar, ex-Voodoocult) and Ventor (drums, ex-Ninnghizhidda) announces the release of Hate Über Alles in 2022 on Nuclear Blast. The line-up is completed by Sami Yli-Sirniö (Barren Earth, Waltari), guitarist since 2001 and Frédéric Leclercq (Loudblast, Sinsaenum, ex-DragonForce), bassist since 2019. 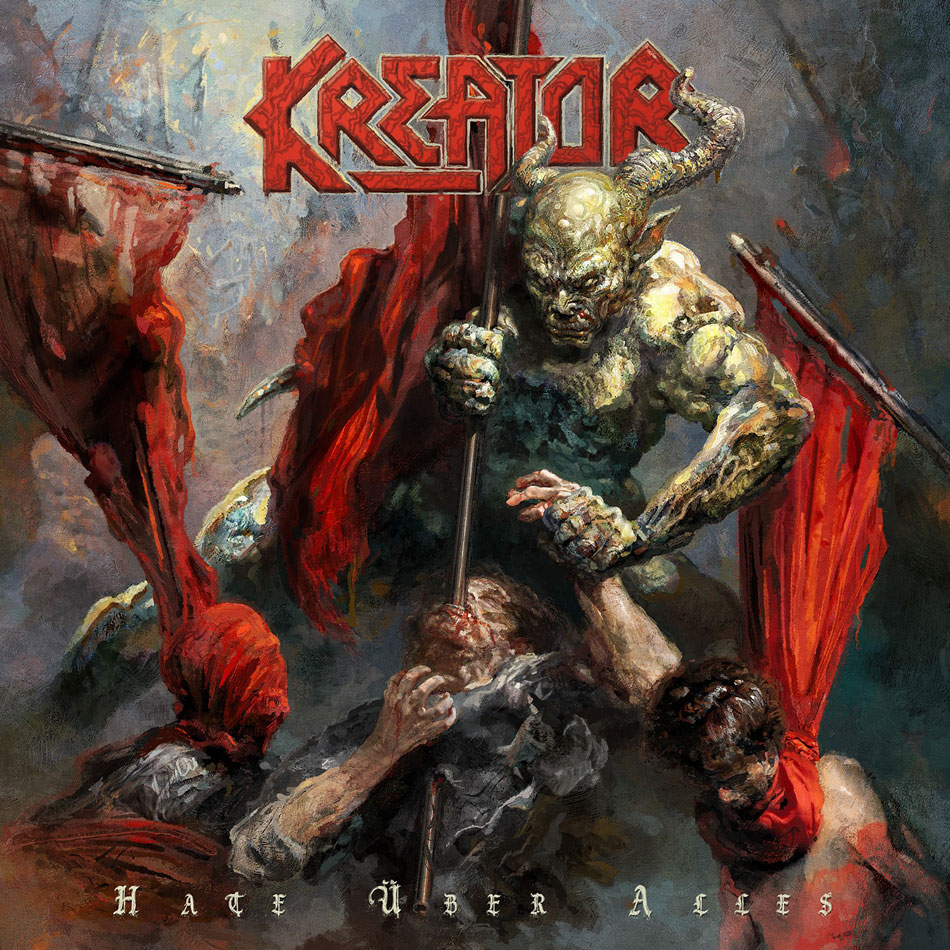 The album starts with Sergio Corbucci Is Dead, a melancholic introduction that quickly becomes epic, just like the eponymous filmmaker, then Hate Über Alles comes to crush us with its solid Thrash Metal. Speed, efficient riffs and communicative screams are the main elements of this federating track that places piercing leads before Killer Of Jesus takes over with the same abrasive rage. The frantic rhythmic and the warlike screams let the guitars offer abrasive harmonics or dantesque solos, then Crush The Tyrants comes to sound the revolt by making the tempo slow down. The sound remains martial while being quite melodious, just like Strongest Of The Strong which revives the aggressive energy of the riffs. The track is literally made for the stage, offering one of the catchiest sounds possible, with a chorus that you already want to scream before headbanging on Become Immortal and its very Old School roots. The track will also offer a more majestic break before returning to the violence by mixing it with these new sounds, then Conquer And Destroy reveals us a soft and melancholic intro before the raw sound resurfaces. It will be once again contrasted at the end with more soaring and majestic injections, just like Midnight Sun which places us very solid elements accompanied by female choirs signed by Sofia Portanet, a German singer. The duet is surprising but very interesting and rich, then it gives way to Demonic Future, a track much more focused on effective and aggressive sounds. We can still feel more melodious and heady roots on the side of the leads, but the track remains effective as well as Pride Comes Before The Fall which mixes catchy and fast riffs with softer melodies and clear singing choruses. The band wonderfully masters this contrast, and it will also be present on Dying Planet, the long last track, which is a bit more haunting than usual while letting the piercing screams rage under this martial and heavy mix, which even lets ghostly elements close the album.

Kreator has nothing left to prove, but the band will still surprise us. While Hate Über Alles hits us at first with a very raw and efficient aggressiveness, the mighty German Thrash also knows how to contrast its devastating universe with surprising sounds.