Motionless In White is back to haunt us.

Created in 2005 in the United States, the band now composed of Chris « Motionless » Cerulli (vocals), Ryan Sitkowski (guitar), Ricky « Horror » Olson (guitar/backing vocals), Justin Morrow (bass/backing vocals) and Vinny Mauro (drums), presents us with 2022 Scoring the End of the World, their sixth album, in the line of their style between Metalcore and Gothic Metal, accompanied by a few guests such as Alyce Madden and Ellie Mitchell on vocals. 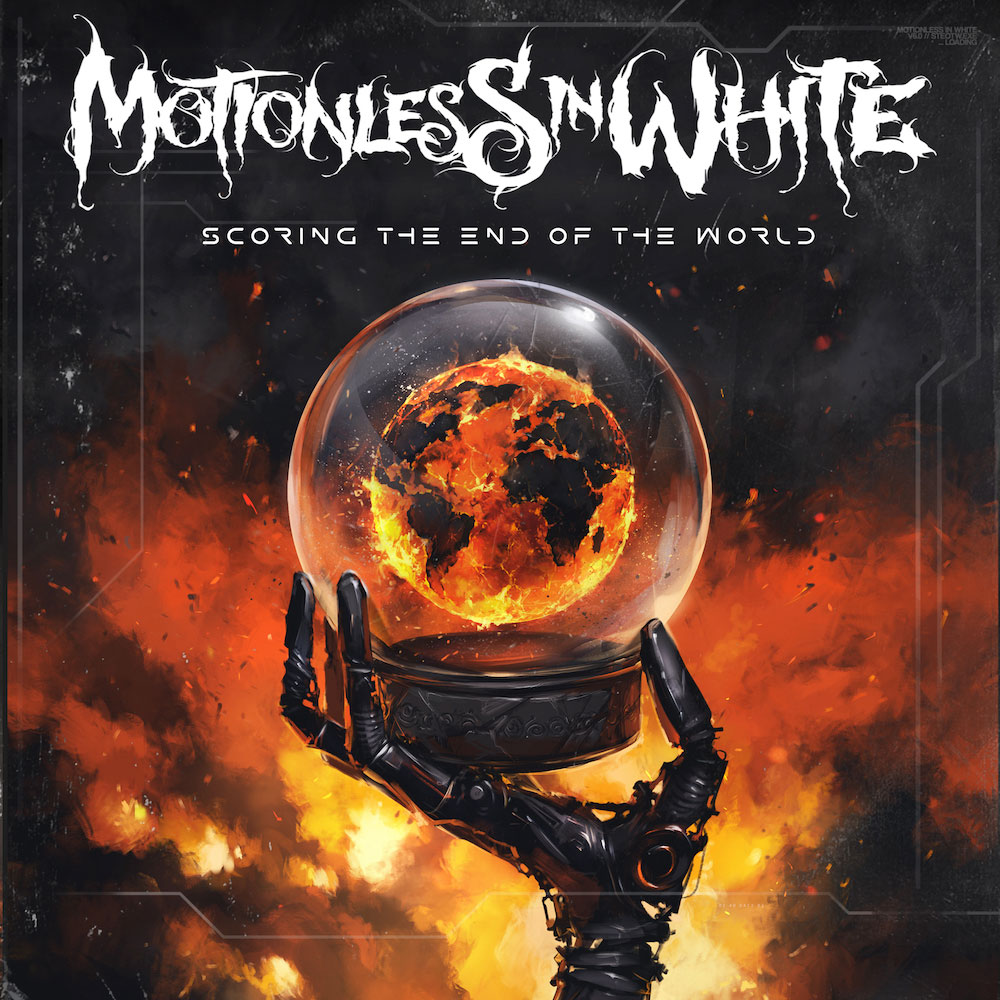 The album starts with Meltdown, a very energetic and modern composition with jerky riffs which give way to the singer’s clear voice and screams as well as more Hardcore oriented elements. The sound remains very catchy, just like Sign Of Life which is more accessible without ever neglecting the violence or the aggressive parts when the band considers them necessary. We continue with the frightening Werewolf which revives the Gothic roots and Electro/EBM influences while the vocal parts multiply and diversify, creating an omnipresent feeling of insecurity, just like on Porcelain which reveals an oppressive atmosphere. The track is darker, more focused on an obvious fragility, then the abrasive aggressiveness resurfaces with Slaughterhouse, a track where the band invites Bryan Garris (Knocked Loose) to get back to its style’s raw roots. The moshparts follow one another under the screams, then the musicians offer us a short moment of respite with the introduction of Masterpiece, a track that mixes their most groovy and melodic influences to offer us an efficient sound before going back to an obvious rage, just like on Cause Of Death that remains anchored in this Old School sound. Blast meets the jerky riffs and the majestic keyboards, but also a very soft break broken by the violence, while We Become The Night offers us electronic and heady sounds to feed these effective riffs. A few theatrical parts join the choruses that fans will already want to sing along with the band, then the melancholy of Burned At Both Ends II takes over, its softness echoing the unbridled rage of the track released ten years ago. The intensity is present, especially in the lyrics for those who understood them in 2012, and we gradually feel that the band reconnects with the rage, which will explode during the break, then B.F.B.T.G. Corpse Nation will open the doors of an anguished softness, quickly broken by the violence and heavy riffs. We’ll find very catchy sounds on the chorus, and the contrast gets very regular to propose an interesting relief with Lindsay Schoolcraft (Antiqva, ex-Cradle of Filth), before CyberHex comes to make us shake with its icy Industrial influences. The singer also offers us some backing vocals on this catchy track, then the band calls Caleb Shomo (Beartooth, ex-Attack Attack!) for Red, White & Boom, a song shaped for the stage. There is no doubt that the festivals will be agitated on this rhythmic, but the album already ends with Scoring the End of the World, the eponymous track, on which the band welcomes the legendary musician and producer Mick Gordon (Bring Me the Horizon, 3Teeth, Monuments, Doom Eternal, Wolfenstein: The New Order…) to give a new dimension to this dantesque track.

I have always appreciated the music created by Motionless In White, and I saw their evolution album after album. Scoring the End of the World proves us that the band remains faithful to its roots, but also proposes some more violent, softer elements, but also guests who bring their own touch to the universe.