What could be better for the first review to start by the very first Metal album of all times ?
Every metalhead must listen at least once to Black Sabbath. By Black Sabbath. Littéraly the godfathers of Metal.

Let’s step back in time 47 years old. John Michael « Ozzy » Osbourne, Terence Michael Joseph « Geezer » Butler, Anthony Frank « Tony » Iommi and William Thomas « Bill » Ward gather in the Regent Sound Studio in London for 3 days of full rehearsal for recording the most mythical album of all times.
Inspired by Blues music, the 4 guys want to create a « sound of horror movie », helped by the tritone with low tempo.
Friday the 13th of the year 1970, Metal was born. 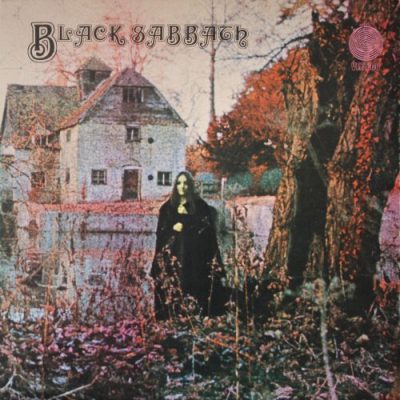 This album was criticized first by Lester Bands from the magazine Rolling Stone as bad, because it sounds inhabitual compared with classic rock.
However, it was quickly rewarded (gold then platinum record), so Rolling Stone changed its opinion (243rd of 500 best record of all times).
A dark and creepy sound, strings tuned lower than standard tuning, a trembling voice, lyrics inspired by Tolkien, Lovecraft and that refers to Satan, a cover that gives you the creeps.
There’s a lot of blues references : Evil Woman and The Warning are cover songs, Ozzy plays harmonica on The Wizard…
The foreground is created, riffs are violent at this time. Black Sabbath created a monolith, and they don’t want to stop like this.

Even if the mastering is 47 years old, this album has not aged, and it is still quoted by numerous musicians as a masterpiece.
As wine, Black Sabbath earns maturity and flavour. Listenning to this record by a cold winter night makes us sink immediately in the middle of a horror movie. Absolutely awesome.